The Den’s “Late Night Bingo with Billy Francesca” is a Wild, Winning Evening on the Strip 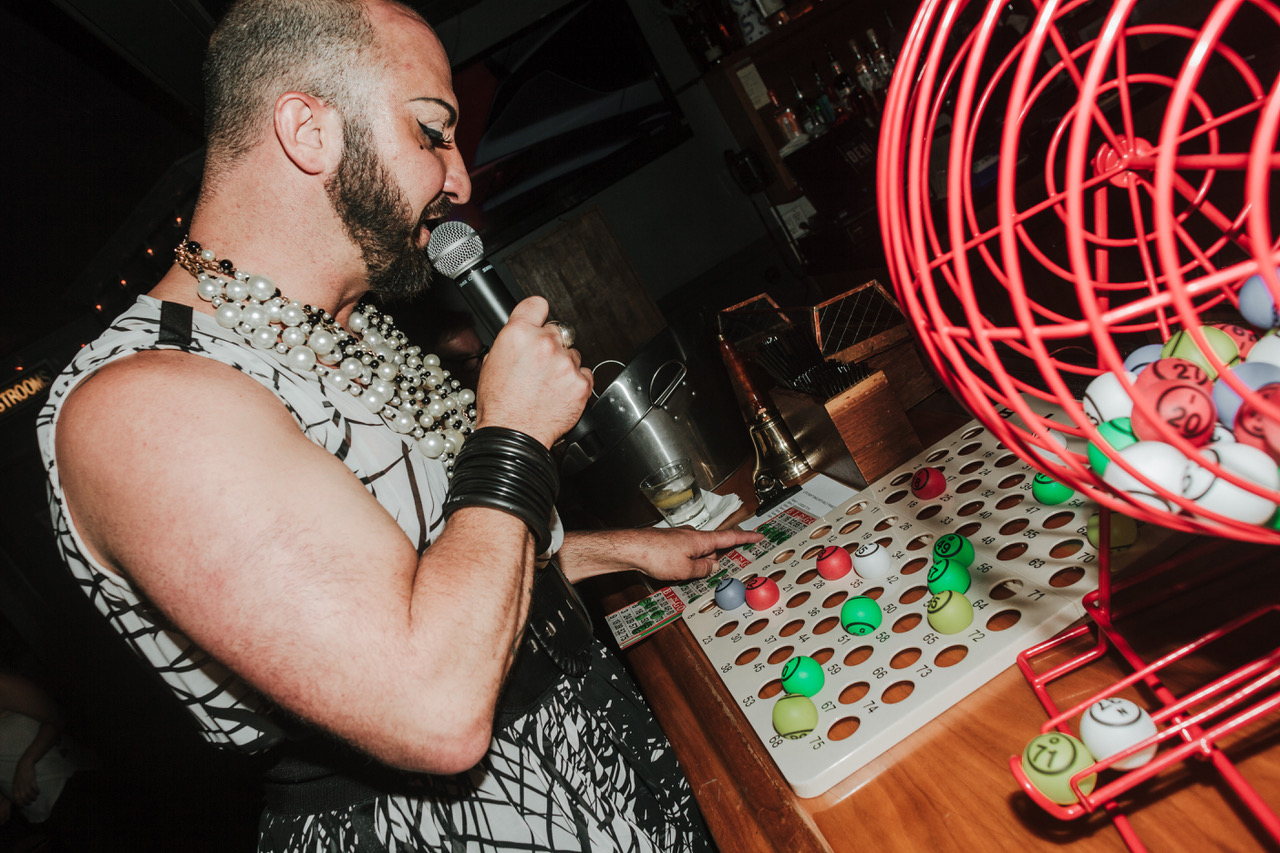 Going down the last Thursday of every month at The Den, the uproarious, interactive vibes attract an intriguing mix of locals, out of towners, foodies, barflies, and everything in between, young and old, gay and straight, all coming together for an evening of competition and carousing like no other.

Originally from Boston, Francesca has been hosting LA’s hottest nightlife events for 15 years now, focused mostly in the West Hollywood area. His charismatic personna has made him so popular, he is an enduring and endearing presence on the main stage at West Hollywood’s annual Gay Pride celebration and has been for the past 10 years, making him the longest-running host the globally-recognized event has ever had.

Though most of the events Francesca promotes and hosts around town are LGTBQ-focused, he says that his nights at The Den are mostly straight to mixed in terms of sex and sexual preference, which he finds makes for an unpredictable, inclusive, anything can happen feel. Laugher, goodies, give-aways and great music (he curates the soundtrack and plays everything from Patsy Cline to Aerosmith) simply bring people together, he says.

“Sometimes I’ll come in and there will be people who don’t know about the night or have any idea what’s going on,” shares Franscesca. “A lot of times it’ll be a bunch of guys sitting around at a table and I’m wearing a dress and I’m all done up. I ask if they want to play, and they say they’re good, but 10 minutes later they’re like, ‘where’s my bingo card?’ Like clockwork. So now I just give them a card either way. They love it.”

“Eventually everyone is carrying on and doing their thing and they just dig it,” states the statuesque drag lover, who likes to don sequins, glitter, lashes and high heels for his gig as host(ess).

The Den’s manager, Shawn Ilardi, who brought Francesca on board a little over a year ago, agrees. “Billy Francesca’s Late Night Bingo has been a great addition for us,” she enthuses. “We celebrated one year in April, and suffice it to say he is stuck with us. He is our “lover duck”… and I’m not sure how we came about this nickname!”

Maybe it’s about the way he poses for pictures, but Francesca’s nickname could also refer to the love and laughs that permeate The Den when he’s in the house. “I’m 6’2” and a bearded hairy drag queen,” deadpans Franscesca. “But I think I’m Sofia Vergara’s body double. People look at me like, ‘no girl, you’re like a baked potato in a dress.’ So I’m already making fun of that. I think people come together here because I’m not taking myself so seriously. I make fun of myself so I can make fun everybody else. And I have a lot of fun doing that too.”

Indeed, no one is spared from Franscesca’s funny, immersive reparte in the Bingo room (the bar area up front provides a quieter hang out for those who seek that). And if the wild show he puts on wasn’t enough, Late Night Bingo also boasts tons of great prizes, from free menu items (their loaded tater tots are a huge hit) to free cocktails to gift certificates. A $100 Den credit is the grand prize for a full bingo card by end of the night, but everybody leaves feeling like a winner.

Also check out The Den’s other participatory promotions: Trivia on Mondays, Rockstar Karaoke and Wine Night (both on Wednesdays), and their bustling dinner service (featuring their popular flatbreads, burgers, salads, and desserts) along with wickedly good weekend DJs.