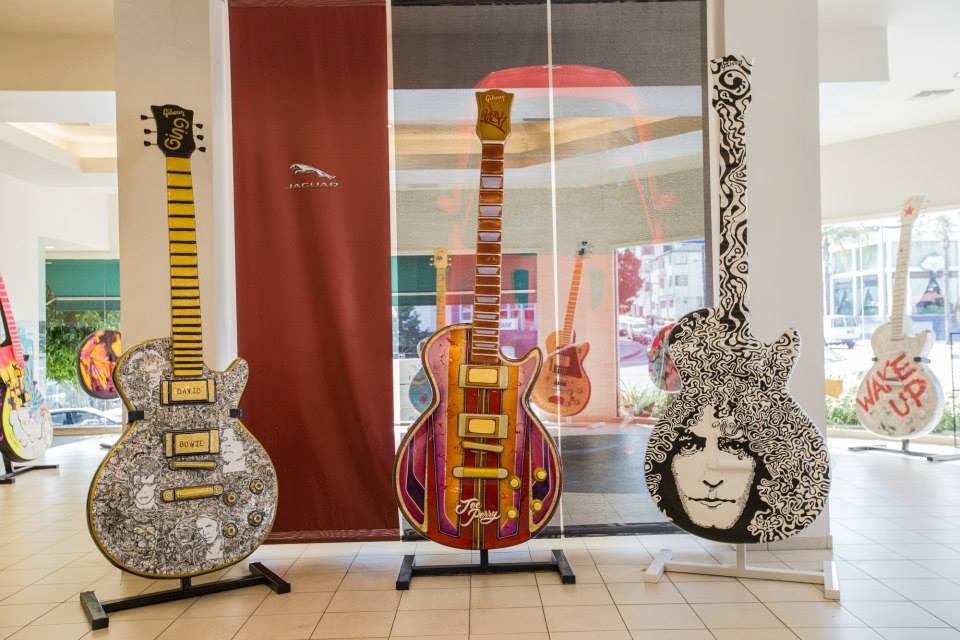 What is to be the final round of giant art guitar sculptures was recently unveiled at a special launch party event at Hornburg, West Hollywood.  The 2014 installment of Gibson GuitarTown on The Sunset Strip, features works paying homage to this year’s Sunset Strip Music Festival (SSMF) honoree Jane’s Addiction, as well as Day 2 headliner Empire of the Sun, Steven Tyler, Elton John, Freddie Mercury, David Bowie, Prince and The Viper Room, amongst others.

A range of artists participated in the 2014 installment, including returning “rockstar” artist Stacey Wells, graphic designer/photographer Ruben Esparza, whose work is included as part of the permanent collections of the Los Angeles County Museum of Art, and Kevin Llewellyn whose work is highly sought after by celebrity collectors.

As in previous years, the 2014 Gibson GuitarTown art guitars will be auctioned for charity at the end of their “tour.”  Collectively, the previous auctions have raised more than $147,250 for charities, including Music For Relief, which provides aid to survivors of natural disasters; the Los Angeles Fund for Education’s “Arts Matter” campaign, which funds art and music education programs in Los Angeles public schools; the Los Angeles Youth Network, which provides services for homeless youth; West Hollywood Library and funds to support public art in West Hollywood.

The guitars will be on display at the SSMF 2014 (Sept. 20 and 21) street festival before being placed along the boulevard for public display.

This round of 2014 Gibson GuitarTown art sculptures include:

Stacey Wells’ art can be found displayed at some of the most prestigious celebrity galleries in the country, alongside other talented artists such as: Ron Wood, Grace Slick, Ringo Starr, Sebastian Kruger and more.  Paintings from her RockStar Reflections series have been featured at a private event for Gene Simmons and her portrait of Steven Tyler hangs in the singer’s Hawaiian home.  Inspired by the vibe of The Sunset Strip, Wells chose Seven Tyler and his band Aerosmith for her subject matter.

Sarah Chang of Sarah’sINCOGNITO is a London born, Los Angeles based artist.  She is self taught and began painting at the age of 14. Sarah has worked with a broad range of partners and collaborators, from an LAUSD commissioned mural commissioned at the age of 16, to Fred Segal, to the Santa Monica Civic Auditorium. Currently Sarah is focused on developing public art projects as creative solutions for several cities: LA><ART, the Laguna Beach Arts Commission and the Watts House Project, as well as several commercial real estate development projects in Southern CA.

A graduate of Fine Art from the University of Maryland, College Park, Antoinette started out primarily as an oil painter, before discovering her true love of chalk.  She runs her own wearable art business (L’Antoinette Originals, et al.), is certified in textile design, an active member of an art collective (DAKO Vanguard) and co-proprietor of a downtown LA art gallery.  She is now adding public and private mural arts to her portfolio, and is actively involved with various arts alliances and projects around the Los Angeles area, including the 6x6x6 Program in which six local artists create 6×6 murals to install in San Fernando Valley schools.

A Los Angeles based artist, graphic designer, photographer and curator, whose work is included as part of the permanent collections of the Los Angeles County Museum of Art, Museum of Contemporary Art, San Diego, the Santa Barbara Museum, National Museum of Mexican Art, Chicago Illinois, among others. Esparza’s work also hangs in private collections throughout the United States, Latin America and Europe.

Joshua was born and raised on a small farm in East Texas, joined the military when he graduated from high school and spent a year in Chicago for boot camp and school.  He was sent to San Diego for further school and graduated with honors from one of the toughest programs in the Navy.  He was then stationed in San Diego and stayed until 2005.  After finishing his tour with the Navy, he was discharged with honors and moved to Los Angeles in January of 2005. He has been in West Hollywood since then, and loves the creativity that inspires him.  He recently began drawing and painting again.

F O R E M O S T (Darryl King) is a working visual artist and educator with a studio in North Hollywood, California. He is self-taught, and primarily works with magazine cutouts, sculpted and painted surfaces, and found materials to create large-scale collages.  He received a BA in Art History and a M.Ed. from the University of California Los Angeles, and has also worked with fellow L.A. based artists Patrisse Cullors and Zeal Harris.

“Wake Up” – Rage Against the Machine

Demetra Karras is a graduate of the Savannah College of Art and Design. There she studied Production, Costume and Set Design, with an additional emphasis in Film and Video Production and Computer Art.  She is currently at work on a series of Mixed Media Pieces in Los Angeles, CA.  Demetra is also the creator and owner of Fully Loaded Hearts.

Educated at the University of Nebraska – Lincoln, Roe earned a BFA with a studio emphasis in graphic design. He has worked designing key art and DVD packaging at POV Entertainment in North Hollywood, for clients such as HBO and Warner Bros, on projects like Big Love and The Wire.  In subsequent years Roe has worked designing television graphics for BrandX with Russell Brand, even Art Directing the identity of the 2nd season of the show.  Since July of 2013 Roe has been at Jewel Box Platinum in Marina Del Rey designing custom gold and platinum records displays for the music business.

Kevin’s works have been featured in a number of major shows, including the Forum Gallery in NYC, the Arkansas Art Center Museum, Kat Von D’s Wonderland Gallery in West Hollywood, and the Butler Institute of American Art – the museum where Llewellyn was given his first solo exhibition at age 21.  Llewillyn’s work has also caught the eye of collectors such as Madonna, Kat Von D, Ian Montone, Robin Williams, Trent Reznor, Mark Romanek, Scott Rodger, Nancy Berry, and Balthazar Getty.  Most recently Llewellyn was the subject of an LA Weekly article where the publication examined his unorthodox practices of recording subject matter.

“The Man Who Sold the World” – David Bowie

Eleven years ago, Burman-Loffredo started using painting and drawing as his outlet for his recently discovered hidden creativity.  “My drawings allow me to look deep inside my soul and work on its difficulties. I draw the past, present, and future in order to learn how I can be a better person, and what I can give to the world”. He thrives on being able to use his art as a healing process, not only for himself, but for those touched by his work – giving half of his earnings from art shows to charities he is passionate about.

Forrest Holt is an aspiring Graphic Artist specializing in digital art, typography, and illustration. He currently resides in Simi Valley, where he has designed and implemented multiple posters for non-profit organizations such as “Not One More,” a group that helps raise awareness of heroin addiction.  Having just turned 18, he is very excited to be the youngest artist to contribute to the Gibson GuitarTown on The Sunset Strip art project.

Snow graduated from Humboldt State with a BA in Fine Art and continued on to the San Francisco Art Institute to receive a Masters of Fine Art Degree in Print Making.  Willard has worked professionally as a presentation designer and teacher of graphic design computer applications.  Sharing and teaching are both lifetime passions of Snow’s, he has been a teacher at the San Francisco Art Institute, California Art Institute North Hollywood, and Torrance Unified School Districts adult education program.  Currently he is working on promoting his art at events all over the West Coast.