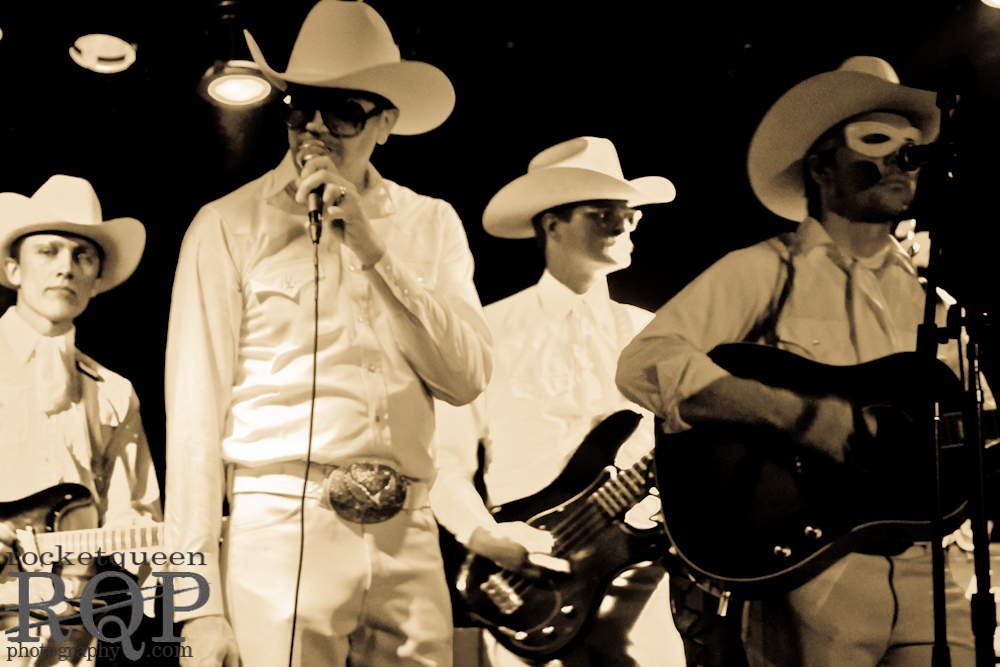 If Sergio Leone and Quentin Tarantino picked up guitars instead of cameras, chances are their music would’ve sounded pretty damn close to Brent Amaker and The Rodeo. The Seattle-based six-piece recently stopped by the Viper Room on The Sunset Strip to bring their new record, Year Of The Dragon, to a growing cult following of fans across the U.S.
Before donning their crisp, white western wears and taking the stage, Mr. Amaker himself took a moment to speak with TSS.com about their much buzzed about new full length, the blur of life on the road and the quest for – of all things – a laundry detergent sponsor…
Western music from Seattle? What are the origins of The Rodeo?
Me and a group of friends decided to try and write some western songs influenced by music from the past…  It's been a long time since modern country music has had any real attitude.
When we first formed, we were riding our motorcycles to our gigs. That was the one thing we all had in common – we liked to ride. But in the end, the bikes were a logistical nightmare. So we ditched 'em and kept our focus on the music!
Tell us about the new album, Year Of The Dragon. Is there an overall theme?
2012 was actually the year of the dragon, and that's when we did most of the work. The overall theme is based on our travels, I suspect…
We take a western cinematic attitude and apply that to things we've experienced as a band. And if you think about it, most western films are based on cowboys traveling and overcoming obstacles. That's what we do; most of the things I write about are inspired by real life. And while this project may have started as a concept, we now live it every day.
At this point the songs are coming from a very real place.
Who would be your dream collaboration?
I'd love to work with Mark Mothersbaugh. DEVO is one of my favorite bands of all time. We are influenced by a lot of music in film, and Mark is "the man" when it comes to scoring soundtracks. If I could ever get him to produce one of our records, that'd be the shit!
What's the story behind your song "Tequila Cerveza?"
I've found that touring as a band can be a lot like an episode of the “Twilight Zone.” Every day leads to a new town, and every day becomes a time loop of driving to the gig, loading in and playing the set. It becomes your reality, and it's not like any other reality out there.
"Tequila Cerveza,” to me, represents that moment I step on stage on a night when I've been touring too long. I can't even imagine what's happening with the people who are in the crowd. I don't know what they did with their day. I don't know there problems. So the best thing I can say to a room full of strangers is "let's drink!”
Please recount your most infamous rock n' roll road story.
A lot of people of have been talking about the time I ate a bloody steak on stage. Our girl Bunny took her shirt off and served it to me with a glass of wine. The band kept right on playing and we kicked back into our set the second I was finished eating. I really enjoyed that experience. I felt like a king!
Bonus question: What's the secret to keeping crisp, sparkling white outfits when on the road?
We wear our matching black outfits during the day, and change into the white ones right before we perform. When we're done, it's back to black. I'd really like to find a laundry detergent sponsor soon so I have a better answer to this question.
——————-
Brent Amaker And The Rodeo are currently touring the U.S.  Their new album, Year Of The Dragon, is available on iTunes.
brentamaker.com
facebook.com/BrentAmakerandtheRodeo
twitter.com/brentamaker
— Brent X Mendoza
Photos courtesy of Jessica Pix, RocketQueen Photography