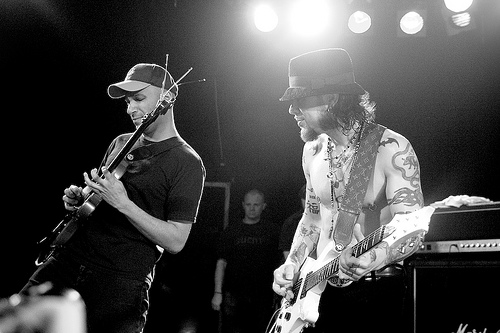 One of the things I like best about live rock and roll is when it’s full of surprises. I loved it at this year’s Coachella when The Time joined Prince on stage to open up his show, and then he really threw everyone for a loop with his own, Prince-ly rendition of Radiohead’s “Creep.” When The Roxy Theatre kicked off fiveThursdays of Camp Freddy in the month of May, the draw there was surprises, too.

In fact the whole show is one big surprise. Guest artists popping in on almost every song: handling lead vocals, sitting in on drums, taking on lead guitar. The best in the business rocking out on recent favorites and classics, with the lineup changing all night, every night. A great, Hollywood-style rock and roll party.

It doesn’t hurt that for starters the Camp Freddy house band included Dave Navarro from Jane’s Addiction, Mark McGrath from Sugar Ray, Donovan Leitch and Billy Morrison among others. Then add in guest appearances from the likes of Slash, B Real of Cypress Hill, Chester Bennington from Linkin Park, the Deftones and Tommy Lee, and you’ve got a pretty great show to build an evening around.

I witnessed Camp Freddy “show number three” for myself on Thursday, May 22, and was treated to a version of Van Halen’s “Hot For Teacher” featuring Steel Panther. The Cult’s own Billy Duffy joined in for a fantastic version of his band’s “Wildflower,” and Jerry Cantrell joined McGrath on “Cat Scratch Fever.”

One of the most bizarre and interesting moments of the evening came when the Sex Pistols’ Glen Matlock was joined by Tiffany (yes, “I Think We’re Alone Now” Tiffany) for a pretty rockin’ version of the Pistols’ “Pretty Vacant.” Never thought I’d be applauding Tiffany for a gritty performance of a Sex Pistols’ tune, but there is was, on stage at the Roxy.

Also in on the fun were Incubus’ Brandon Boyd, who guested on “Good Times, Bad Times,” and Fuel’s Brett Scallions. And offering up some of the highest octane star-power of the evening was Rage Against The Machine and Los Angeles’ own Tom Morello playing guitar on “Roadhouse Blues” and “Brown Sugar,” then sitting in on drums for a rousing finale of The Stooges’ “I Wanna Be Your Dog.”

Camp Freddy’s sold out May run may be done, but my ears are still ringing from all of that great rock and roll performed by so many of the world’s best. The show was such a success that I wouldn’t be surprised if we see some more dates in the near future. But those of us who were there to witness it in person have a little piece of rock and roll history, raw, unscripted, and loud, etched into our souls.