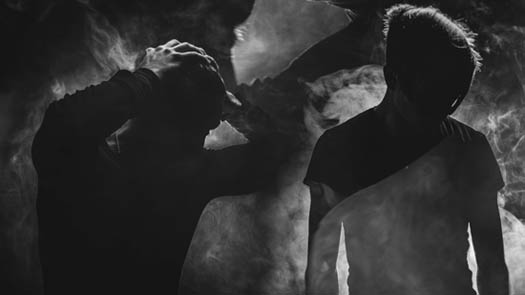 Rarely ones to indulge in much more then a measure of rest, AFI vocalist Davey Havok and concerted partner in crime, guitarist Jade Puget continue to experiment with side-projects that hearken back to the genres that have shaped and inspired them both as musicians, and influenced their lifelong ideologies.  With no exception, Havok and Puget’s new hardcore straight edge project XTRMST, finds the duo returning to their roots, assembling one of their most aggressive and visceral recordings to date.

Before debuting this new opus of angst to The Roxy Theatre masses this Thursday, hard-line frontman Davey Havok phoned in to TheSunsetStrip.com to discuss 20 plus years of straight edge, share his thoughts on this year’s Coachella lineup and weigh in on the current state (what’s left of it) of rock and roll.

What was the catalyst for realizing this new project XTRMST, and bringing it to fruition?

Havok: Well Jade (AFI guitarist Jade Puget) and I have been a part of the straight edge community since we were very, very young and for many years we talked about creating a straight edge band… And it’s taken us years and years before we had the time, and before it was really the right moment to do so.  And while we were working on writing the last AFI record (Burials) we began writing XTRMST material as well, because we had been talking about it again and we felt that we could do it – so we did.

Havok: Well for a band to be a straight edge band, it first needs to be comprised entirely and exclusively of straight edge members, and secondly it then has to forward the straight edge agenda – which is a movement in self-respect and respect for others through the abstinence and opposition of, and to, recreational drug use.

And how would you say your own personal perspective or philosophy of “straight edge” has changed or evolved over the past 20 plus years?

Havok: As far as my philosophy goes, my beliefs, and my involvement in it, my dedication to it has really only strengthened as life has gone on.  I’m very happy that we waited this long to create this record, because I think that there is a perspective to it, with having so many years of being performers – and you know just being humans in this world – under our belts, it gives a different credence to the perspective than one that my 15 year old self may or may not have had, or my 20 year old self may or may not have had.  I think that Jade and I being adults, and still believing in what a lot of people discount as a youth movement, really changes the outlook on it…

As the world continues to fall apart and deconstruct itself and I see people compromising their lives, their bodies, their minds, and their relationships for the sake of fitting in, for the sake of brief highs, it really furthers my commitment to my beliefs.

Recording the XTRMST record and also AFI material simultaneously…  Was that difficult to sort of switch hats creatively and compartmentalize each project?

Havok: It wasn’t difficult in that instance because the two projects were so different that they were very definitive, and so to switch back and forth was easy because they were so distinct from each other.  Also, XTRMST was so organic and came so quickly, it was so natural – it was something we really had been building for years at least theoretically, so at the point when we decided to move forward with it, we really were creating with ease and a quickness that was unparallel to anything else Jade and I had ever created together in the past.

I remember you had vocal surgery a few years back… Was there any concern about the harsher, more scream-ier vocals for this project?

Havok: It has not affected me personally in any way so far… Certainly it was a concern, and it was something I was very mindful of and cautious of when I was tracking the record.  But during the tracking of the record I was able to deliver those very brutal screams with ease and without damage so far… And as I’ve been rehearsing them, I’ve experienced the same positive result, so hopefully that will continue as we begin to perform live.

The Coachella lineup was recently announced, and of course everyone has an opinion… What are your thoughts?

Havok: [Laughter] Well I’m very excited to see Ride.  I never got to see them before so I look forward to that… I’m very happy to see Marina and the Diamonds on the bill, I don’t think I’ve ever missed her when she’s been in California.  Who else… Run the Jewels, it’s exciting to see them on the bill as well… Oh Nero is on it, that’s exciting!  I’ve never seen Nero.  Those are the highlights that spring to mind…

With this festival and I guess sort of music in general, it seems that rock n’ roll is becoming less and less of a dominant force and has gone back to more of a niche genre.  What are your thoughts on the current state of rock music?  Is rock dead?

Havok: Yeah, I mean I think it’s gone away quite a bit.  I think it grew back into being a subculture… You know, it’s more of a niche music style now, as opposed to what it was I guess since the 50s… but I mean there are people who still love rock n’ roll, certainly all the pop artists still use the term [laughter], they speak of “rocking.”  So there is a pop culture relevance to the essence of it.  But currently, musically speaking, I think people are less interested in it then they have been in the past…

And as far as Coachella is concerned… I mean, one of the headliners is Jack White, and in my opinion he might very well be the last rockstar.  He is so phenomenal and he truly is a rockstar, so it’s very nice to see him playing on the top of the bill, he certainly deserves it.

And of course you have this upcoming show here at The Roxy.  I know you guys played there with Blaqk Audio when you were doing that, I also saw an AFI showcase there a few years ago.  Tell us what keeps bringing you back…

Havok: I love The Roxy, I’ve always enjoyed playing there.  I was really excited to hear that they booked us to play with XTRMST…  It’s got a great history, it sounds great, I really like the way the stage feels, and I personally have a long of history with it.  I think the first time I played there was in ’97 – it was AFI, At the Drive-In and By the Grace of God.  It’s just a great venue.

Havok: Well we have the two XTRMST shows of course, and I believe, as it stands now, that’s it for us.  We’re hoping to play in New York… We’d like to go up to New York if someone would be kind enough to bring us over, we’ll do that.  But as of now, the two shows are all we have set…

And Jade and I, we’re done writing the new Blaqk Audio record; so we should be recording [that] very soon I would hope… And I would imagine that would come out this year as well.

XTRMST play The Roxy Theatre this Thursday, Jan. 29.  Doors open at 7 p.m.  The show is sold out!  www.theroxy.com  www.xtrmst.com