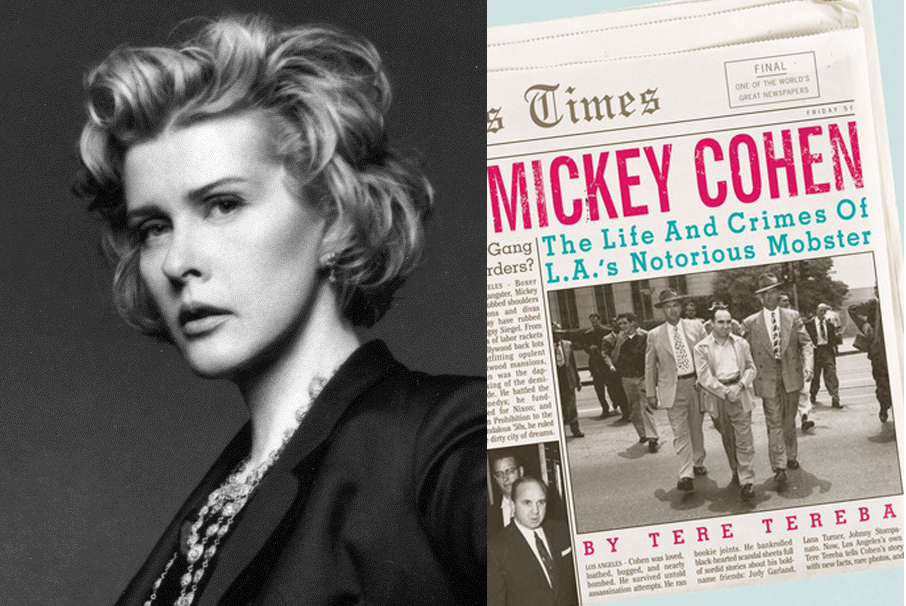 In her new book Mickey Cohen: The Life and Crimes of L.A.’s Notorious Mobster, author Tere Tereba finally exposes the complete story behind one of this city’s most infamous underworld figures. Running his base of operations from The Sunset Strip, Cohen was often seen carousing and hobnobbing with A-list celebrities and socialites at the finest restaurants and night clubs of the day, whilst simultaneously maintaining a sprawling criminal empire.

Learn the previously untold story behind Cohen’s dichotomous persona, as author and celebrity in her own right Tereba gives us a riveting preview of her new publication (the culmination of ten years of painstaking research) that pieces together the most comprehensive Mickey Cohen bio to date.

You grew up in L.A. and spent a lot of your teen years clubbing on The Sunset Strip, can you paint us a little picture of the vibe and the atmosphere during that period?

It was extraordinary because for years, until about 1970, between Crescent Heights and Doheny, the street traffic was jammed and the side walk was jammed night and day. It was unbelievable, so different from what it was before and after.

We just wrapped up the Sunset Strip Music Festival last month. The Doors were the honored band. Would you talk a little bit about your relationship with them?

I only knew Jim Morrison and [Morrison’s long-term girlfriend] Pam Courson. I didn’t know any of The Doors and I actually never saw them perform live in a club. I saw them recording in the early ’70s, when Jim was putting some vocals down in a studio on La Cienega, but I never really saw them in action, on The Strip…

So how did you meet Jim Morrison and Pamela Courson?

I don’t really remember how… I think we met at a party, and I was years younger than she. I was going to design school at the time, and I had an internship at a very famous design house at the time. She had started her store, but it never opened but was actually very incredible and I think we began talking and became friendly and that’s how I met him.

She would always have me around when he was in his “safe and sane place,” and we would have conversations about Oscar Wilde, and very academic things. I think it was something that we all enjoyed and had in common. It was a very lovely time for all of us.

The new book, what initially sparked your interest in Mickey Cohen? Was it your time on The Strip and growing up in Hollywood?

That’s part of it; I wanted to know about the L.A. underworld. We know about the organized crime from everywhere else, but was there not an underworld in L.A.? So my book essentially takes you all the way back to prohibition when Mickey Cohen was a very small child, and it takes you through 1976, and much of it plays out on The Sunset Strip.

I didn’t know that that was going to happen… After uncovering history from ten years of research and going over documents and rare photos, I found I was able to finally deliver a realistic look at L.A.’s underworld, which hadn’t ever been done before. So it really started with me being curious and then I realized that this is an extraordinary story and it’s never really been properly, or even partially, told.

I was fascinated, and shocked by it all… There were literally multiple shootouts on The Sunset Strip; there were shootouts in Brentwood, on Sunset in Bel Air that didn’t make the papers, downtown L.A. Gang war was raging from 1946 to 1950 on the streets of L.A. all surrounding Mickey Cohen…and what I uncovered was a much more involved story of what was going on with Bugsy Siegel being a major Hollywood socialite and how he goes to war right before he was assassinated in 1947. He starts a war with J. Edgar Hoover… All sorts of things going on right around where I live and where I went about my daily business.  All of this history around me that had never been put together in one document and exposed.

Did you initially start out with the intention of writing a book, or was it more of an interest where eventually you realized you had all this material that would make a great book?

What I was finding was so extraordinary. Things had been seen from the side of law enforcement and politicians, but Mickey Cohen was often in collusion with them, so some of the stories that had been brought out prior to my book were stories that Cohen and the authorities had concocted as a sort of a smoke screen from their mutual illicit activities.

These rogues he was working with, they obviously wanted to cover up what was going on, so it took a long time to stitch it all together, and try to get down to naming the names of the actual gang members, that had never been done, and talking about who was fighting who in the gang war, and who were the politicians involved, and how all these things happened.  It was very hard to do and took a lot of work and a lot of research, but it was always fascinating.

Obviously a fair amount of time has passed since all this corruption, but when doing your research was there any sort of push back from people who didn’t want you digging around?

Yes there were, and I don’t really want to say who it was…but it wasn’t the underworld who was trying to inhibit me.

I’m actually speaking to you from The Viper Room. Can you give us any info on the former Melody Room and what was going on then in regards to Mickey Cohen?

That was definitely a place that was used by them as a hangout. He had many hangouts and businesses that were fronts a few blocks to the east by Palm and Holloway on The Sunset Strip. That’s where one of the shootouts happened, there on the corner of Palm. They tried to assassinate Mickey Cohen in his haberdashery, and they killed one of his top lieutenants.  And then two years later there was a big shootout in front of the Key Club.

He was being body guarded by a special high ranking state officer that had been assigned to him to protect him by California’s attorney general and there were numerous civilians wounded. Mickey Cohen was winged and another one of his men died; the special state officer was severely wounded and for a few weeks was on the brink of death but eventually recovered.

So that brought a lot of attention to what was going on, because it was the biggest outbreak of violence in L.A. history that had occurred up until that time. It was an amazing period—there were socialites, European intellectuals, and princes all in L.A. after [World War II].  And during the war there were all kinds of people like movie stars and moguls, and Mickey Cohen brought the violence literally next door to where they were partying at Ciro’s [now The Comedy Store] and the Mocambo.

He also, in 1944 had a casino in a big amazing mansion, up off Coldwater Canyon… So even after all the other clubs closed, he still operated a full service casino where everyone wanted to go, where reservations were required, and it was high rollers only.  But it was eventually shut down because the neighbors formed a line—a human barrier on the little lane the casino was located off of—preventing the gamblers and partyers from going to the “exclusive party house” they called it.

It was just extraordinary how they were so out front with everything and very much mixing in with the normal goings-ons of the day, it wasn’t hidden…  Just east of Book Soup was [Cohen’s personal tailor] Al Pignola’s shop, then it was Courtley’s jewelry store and Michael’s exclusive haberdashery—these were three fronts of his.

And then where The Roxy is now, was a black market for very expensive foods that were sold during World War II, where for the right price people could get whatever they wanted.

And then where Duke’s [was], in the ’60s, ’70s, and maybe ’80s was a steak house where his gang ran operations. So for the kids going to the Whisky, this would be the complete opposite type of a place… It was this little slice of a place called Sneaky Pete’s—pitch black with a few red lights punctuating it, and it probably looked like the mouth of hell to the kids going to the Whisky…but it was for Mickey Cohen’s men and also some aging “ladies of the night.”  They served excellent steaks and this was where they monitored The Strip.

What was the biggest revelation when doing your research for this book?

There were so many revelations…but mostly just how completely out in the open everything was, it wasn’t hidden at all…  The fact that there were numerous shootouts, and the bombing of Mickey Cohen’s Brentwood house on Moreno Avenue. When that happened, the officials even had to get on the radio and TV, and make sure the public didn’t think that another war had broken out, because the surrounding neighbors four to five miles away heard the blast, and nobody knew what it was. They just said it was more gang warfare.

I mean Mickey Cohen was literally on the cover of all five newspapers everyday during some of these years, and he was very active up until 1976; and I think his machine, what he created, just continues on in a different kind of way. He’s no longer alive, but I’m sure there is a lot of activity now that stems from his organization back then.

Tere Tereba will present and sign copies of Mickey Cohen: The Life and Crimes of L.A.’s Notorious Mobster Friday, Sept. 28 at 7 p.m. at Book Soup. www.booksoup.com