THE FAINT BRING THEIR DANSE OF DOOM TO THE SUNSET STRIP 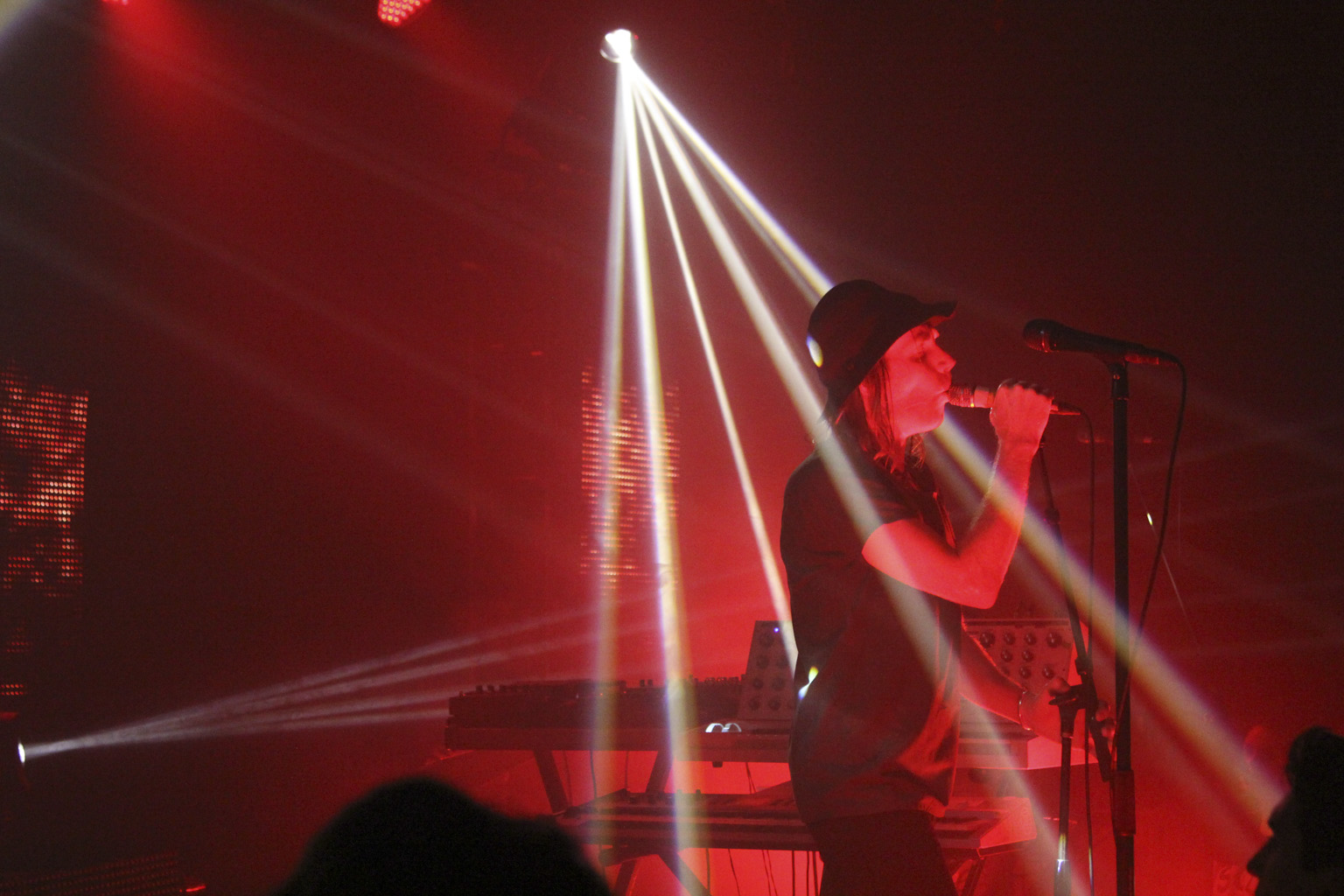 For almost two decades, Omaha, Nebraska based The Faint have been bringing their darkwave brand of dance rock to the ass-shaking masses around the world.  Now with their new album Doom Abuse, the band is back from a six year hiatus with their best received release since 2001’s cult fave Danse Macabre.

Taking their new tunes to the road, The Faint just recently wrapped a nationwide tour that included three back-to-back sold out shows at The Roxy Theatre.  On the final night of their residency, TSS.com was able to wrangle a moment with guitarist/bassist Dapose, who filled in the gaps, as to what finally brought the band back together to record one of their most poignantly urgent records to date.

So the new album Doom Abuse, can you give us any insight into the title?

Well our band is kind of like a collage… You know, we as members are all over the place and like different things; and our work kind of ends up reflecting that and so did the new album title.  In our minds “doom” is a sort of comedic word that’s a lot funnier than the meaning it’s supposed to have.  And I think in this day-and-age when everything is constantly the worst thing in the world, in our minds it’s redundant and just becomes funny.  It’s just all about how that word [doom] sounds to us… In our minds, it just doesn’t sound like what it means.

It’s been about six years between records… What sparked things for everyone to get back to work on this project?

I think in some ways we were just burnt out on the idea of The Faint and you know, we had written the last record Fasciinatiion, and toured the shit out of it, and we wanted to pursue some different musical ideas… I did a few different side projects and the other guys, they were getting more into the club scene – DJing and making some more electronic type tracks.  We were just trying different stuff, and after a couple of years we were like, “Hey let’s make some music together again!” and it was really fun and we were super motivated and excited.

We pretty much wrote this new record Doom Abuse really quickly… I mean, we’ve been making music for a long time and we just know how to make a record now.

There was just a real sense of excitement that we had gotten back together… We got in the studio and set up our stuff, and we were so quickly and excitedly able to make whole songs.  Which with the history of our band… it takes us a lot longer than most bands to complete a song for some reason.  But we were able to do it really quickly, and have a lot of fun doing it, so there was this urgency of like, “Oh shit, let’s set some real goals and get this shit done!”

And you know, we built a studio on the last record for ourselves to record in, but we didn’t really know how to use it yet… and now we know what the hell we are doing so I think it’s just fun.   We would just sort of set up, hit record and if the first take was fun and good then it was like why redo it?  We used to redo everything a million times for some reason, and sometimes you might get something better, but sometimes you just end up killing the excitement out of it; and I think that’s what you and most people are hearing is this sort of immediacy, and wrong notes and weird feedback that maybe should’ve been edited out, but we didn’t because it helped our fun to have it in.

I guess we’re more mature in a way, but it’s like our maturity wants to be more juvenile.

This tour seems like you’re doing a lot of underplays… Do you feel like your music is more conducive to a smaller club environment as opposed to playing a bigger theater type show?

I personally think that it is a lot more exciting at a smaller place… I mean I don’t think any of us want to play basement shows anytime soon but, yeah smaller I think…. There is definitely something lost in a giant room, I don’t know exactly what it is…

I just like playing immediately right in front of people.  I hate when there’s a huge barricade and the stage is like eight feet tall, and you can barely see a person in the front row – it’s ridiculous.  I kind of like it when people are hanging all over my pedals, you know sweating all over my shit [laughter]. It’s exciting, it’s more fun. There’s always a chance of things getting broken…

What are you listening to right now? What’s on your playlist?

Well, I’ve been listening to a lot of older stuff actually.  I listen to a lot of Brazilian radio and a lot of old country, like Marty Robbins… Just old fucking really well recorded, simple songs.  I like that shit a lot.  I’m excited to hear the new Venetian Snares… but I go from that to like…

We’ve been listening to a lot of old metal on the bus like Kreator.  I love all that thrash metal…  But then I play something like Ricardo Villalobos backstage…

I mean I can’t imagine listening to just one genre of music…  I’m sure most people don’t anymore.  It’s like you don’t have to be afraid anymore… like back in the old days, meaning like the 80’s and 90’s, you would just listen to one style of music, and if you strayed from that all of your friends would be like, “What are you doing?”  They’d give you shit or beat you up or something.  And now it seems it’s just about endless exploration.

The band has been around in some form or another for almost 20 years now… and I noticed in prepping for this interview, it seems like there’s not a lot of information out there about the band in general.  Is that a conscious effort to sort of stay under the radar?

I mean it always has been sort of… I mean we don’t put energy into it as much as we just don’t put energy into projecting our individuality and personalities into the world.  You know, it’s personal, and it’s really nice to be able to walk through our shows and not be recognized.  I don’t know how that exactly happens, buy yeah I  mean we try to be… The name of our band is The Faint after all, so it’s kind of like there’s different ways of looking at that… we’re not into super big stardom or fame or anything, we just like playing music.