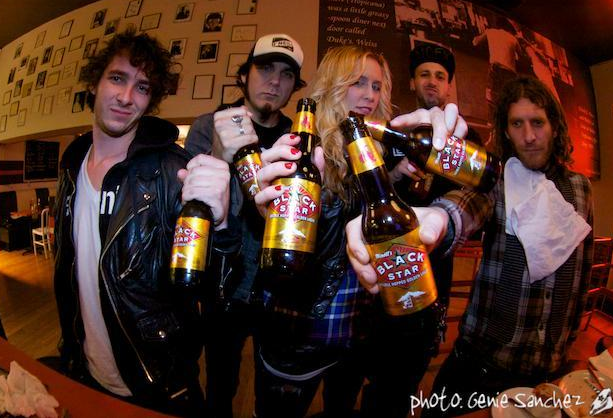 The Sunset Strip roars into 2012 with rapture worthy revelry set to take place at The Comedy Store, The Viper Room, The Roxy Theatre and Rock & Reilly’s. Before committing to your first regrettable midnight make out sesh of the New Year, see how the members of Semi Precious Weapons and Warner Drive as well as Dirt Nasty, Kosha Dillz, Cisco Adler, and your favorite standout stand-up comics plan to usher in Armageddon at the most ragingest parties since Y2K.

Who will you be kissing at midnight?

Jodi Miller (comedian): Probably my cat. Oh wait… he won’t be at The Comedy Store. So

hopefully the drunkest guy there without a girlfriend; then my cat.

Stevy Pyne (Semi Precious Weapons): We hit the stage at The Roxy at that time, so I’ll be kissing my axe in preparation for destruction!

Kosha Dillz: Hopefully the girl I’m talking about in the “Sweatpants Song!”

Elvis James (Warner Drive): Probably one of my band members…whoever is the closest. Kind of a thank you to them, and I kinda always wanted to kiss one of them anyways.

Nick Youssef (comedian): The mouth of the champagne bottle I’m holding, then everyone within arm’s reach.

What will be your beverage of choice on NYE?

Jonny Law (Warner Drive): Budweiser! Who needs NYE to treat themselves to the king of beers?!?!

Stevy Pyne (Semi Precious Weapons): Our bass player Cole Whittle is the only one who prepares me the right beverage — a "special drink," which is just whiskey and Diet Coke, but he has the special ratio touch.

Kosha Dillz: West Hollywood’s finest H2O. I’ve been sober for a while. No breaks!

Nick Youssef: A bottle of cheap champagne provided by The World Famous Comedy

Cole Whittle (Semi Precious Weapons): Me and my fellow Weapons will be drinking “special” drinks — two parts whiskey, one part Veuve, and finished with a splash of Diet Coke from Duke’s West Hollywood.

Dirt Nasty: My New Year’s resolution is to not have a resolution!

Stevy Pyne: To never give up on what I started as a kid, which is playing and writing

music. I’ve been saying that every year and it’s still happening.

here in the states, as well as Europe and Japan. Then I want to finish a few of the film projects I have going….. I think I will also stop working behind the counter at Jack in the Box.

Melissa Villasenor (comedian): New Year’s resolutions for 2012: stop flaking on people, get to places on time, work out my muscles, be real hot, read lots of books. All jokes aside…be an all around good person and friend as well as stop the habit of peeing in my pants.

Justin Tranter: To put out all the amazing songs we wrote in 2012.

Cole Whittle: In 2012, I will focus on being more sophisticated and elegant. Also, I have

promised myself one public nap per day, and to drunk BMX around the globe while SPW is

Will the world really end in 2012? If so, how will it end, and where will you be taking

Dirt Nasty: The only thing that will make the world end in 2012, is if they pick the Kardashian

show up for one more season. If/when that happens, I’ll be taking shelter in Kim Kardashian’s

Jodi Miller: No I don’t think it will end, but if it does it will be because there were too

many TV shows with the Kardashians. God can only take so much!

Stevy Pyne: My own world might end in 2012 — mental collapse. You can find me in our

rehearsal space, which is where I’m crashing most nights now…or Canada sounds nice.

Kosha Dillz: I hope not! I don’t think so… but let’s say it did; I’m thinking dinosaurs with lasers!

They’re still pissed about that meteor that took them out. 2012 is their revenge! I’ll be taking

shelter with my family and my dog, Arnold, in Jersey.

Sam Tripoli: Yes the world will end next year when Tim Tebow gets Justin Bieber

pregnant and they give birth to a giant Stay Puft marshmallow man named Gozer The Detroyer! And I will be taking shelter at the zombie/porn bunker in Chatsworth.

Melissa Villasenor: I’m not sure if the world will end in 2012, if so I just want to make

sure I’m at Disneyland if it ever happens.

Justin Tranter: It better not end! I want 2012 to be my year; and I want at least a few

years to bask in the glow!

Nick Youssef: I hope it only ends for that media whore family, The Kardashians. Is

there anything in the Mayan calendar about them going broke, homeless and/or mopping floors at a McDonald’s for the rest of their shallow lives?

Dan Crean: The world will never end. We will discover other worlds this year, ancient

What’s your most scandalous/embarrassing/crazy/best NYE story?

Dirt Nasty: I never remember them, so I don’t know… I can’t even remember where I was last

year, so it must have been good!

Jonny Law: Las Vegas, hands down! I can’t say much more (because I don’t remember

much more), but I know there were strippers, propositions, VIP rooms, hotel rooms, and lots of Budweiser involved.

Jodi Miller: I always seem to be working on NYE so nothing too crazy! So maybe this

will be the year I completely disgrace myself and my family. Fingers crossed…

Stevy Pyne: Last year, straight off of the Gaga tour, and recovering from almost two

years of touring… [I] fell asleep before midnight watching the Dick Clark NYE countdown with my parents. Woooooo!!!

Kosha Dillz: Best story isn’t mine: My homie made weed cookies for a party, and his mom

came home and smelled them in the oven. She thought they were regular cookies… She had a couple of cookies before my dude stopped her!

Nick Youssef: About four or five years ago, right after the stroke of midnight, I had sex

with a complete stranger in one of the bathrooms at The Comedy Store. The only part I regret

was pretending to laugh when she actually turned to me and said, "Looks like this year started with a bang! Tee hee hee…" Needless to say, I never asked for her number.

Cole Whittle: In 2010, we played with Gaga, saw a punk show in little Haiti, went to

IHOP wasted, and watched dirty movies in a tour bus on a deserted circus lot in Miami. Duh!

Dan Crean: I drove a cab in Boston for a couple years, and had numerous offers of payment via, ummm… physical contact. The meter never gets paid via “hj.” Remember that!

Catch the performers live on New Year’s Eve (just make sure you don’t mention the Kardashians):

The Roxy. Beta Wolf, Benvenue, Open Air Stereo and Life Down Here round out the bill. Tickets are $25 for general admission, $45 for VIP (must be 21 or older to purchase VIP). www.theroxyonsunset.com

An unlimited open bar for $100 per person. Table service available upon request. For