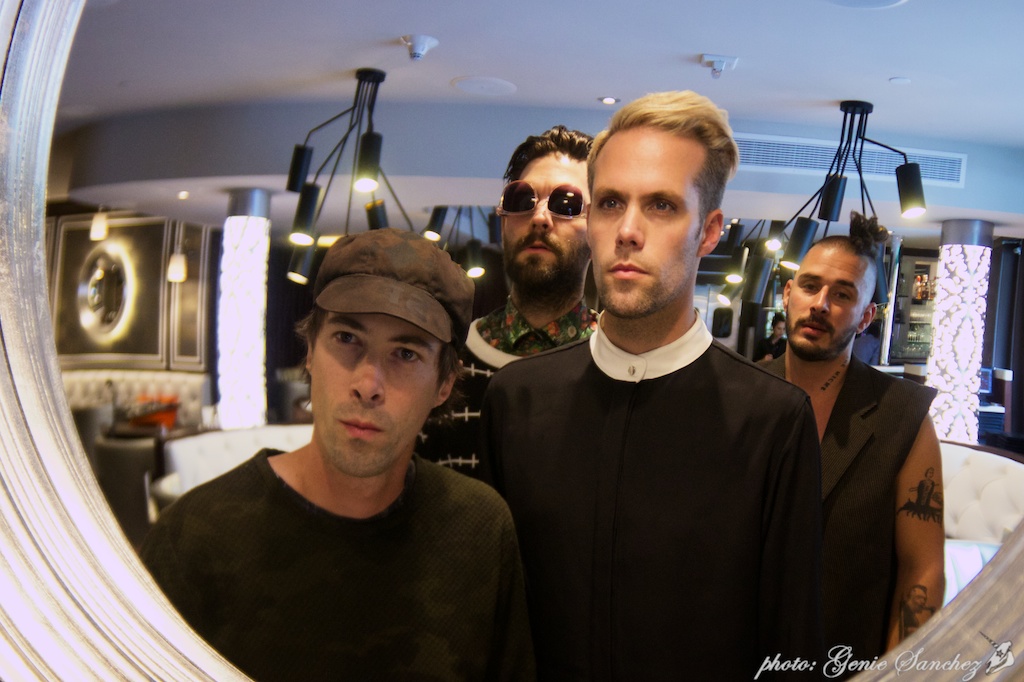 One could say that Semi Precious Weapons made their leap to success here on The Sunset Strip.  The band (singer Justin Tranter, guitarist Stevy Pyne, bassist Cole Whittle and drummer Dan Crean), played their L.A. debut at The Viper Room, practically lived at Duke’s coffee shop and were amongst the headlining acts at the Sunset Strip Music Festival in 2010.

Now after a not-so-brief hiatus, SPW is back with a new album Aviation, featuring a hit single that’s garnering national radio play and has cracked the top 40 on Billboard’s Alternative chart.

Longtime friends of TSS.com, the band recently sat down at Oliver’s Prime – The Grafton hotel’s premiere new steakhouse – to enjoy some eats, drinks (note: Tranter only drank cocktails) and share stories of mischievous misadventure as they “Look to the Stars.”

So tell us about Chinese Democracy… How many years has this new record been in the making?

Tranter: You say it like it was our choice [laughter]. We’ve talked about this before…  It’s been about four years since we’ve released an album.  We didn’t choose this… We were on Interscope, and then we weren’t, and then we were on Epic…

So now we are on Redzone (Entertainment), which is a happier, much better place and they’ve actually released our album… So sadly it’s been four years but you like to make fun of us like we chose this!

The new single “Aviation High” is a bit of a departure away from your usual punk glam sort of style… Was this a conscious decision?

Whittle: Absolutely!  Ya know, when you’ve been doing the same thing for so long, it’s just boring.  We like a lot of different kinds of music and we always have… So we just decided to say ‘fuck it’ and just write the songs, and it is whatever it ended up being…  I mean look at Miles Davis, he had an electro album, with him on the front dressed like James Cagney with a machine gun… We are still the same rock n’ roll band we just kinda wanted to futurize it a little bit.

And long time fans…how has the reception been with the new record?

Tranter: When we first put out Aviation just for free online, there were a couple of our older fans, that were a little upset that it wasn’t straight up guitar riff based – but I think overall, people are really happy about the songs – and there are still some crazy guitar solos… It’s funny, Amoeba (records) wrote a review of the album, and it was like we paid them to say it!  I promise you we did not… It talked about the evolution of our sound, and how it feels like it makes much more sense for us, and it fits much more with my voice and my message much more than our old stuff did… It was pretty awesome!

Was there concern about the whole “sellout” stigma?

Crean: No, because no one gave us any money; so we didn’t sell out [laughter].  I think the lamest thing you can do is not move forward… And to be really honest, the truth of the matter is, that all of our musical tastes are much wider than the music we’ve been making… So we just said ‘fuck it’ because there was nothing else to do; so we just did what we wanted.

Tranter: In terms of the punk and the trashy glam element that we had… We took that as far as we possibly could; I mean we opened for Lady Gaga for a year and a half!

Crean: He got butt naked on stage at Madison Square Garden in front of 12 year olds…

Whittle: Yeah, every single night of those arena shows we were practically naked, playing atonal punk music, screaming and spitting all over everyone, and we were pretty happy with how far that went…  And ya know, we’re not comfortable with animal sacrifice, so we had to do something else [laughter].

Speaking of Lady Gaga… how did you initially meet?

Tranter: Gaga was just a big fan of us from New York… I have no idea how she heard of us first, but she just started showing up to shows, looking awesome, being awesome… and then we found out that she was a performer, songwriter herself…

I don’t think when we first met her she was even signed to Interscope yet, and so she started opening for us in New York, and it just became our thing that, “Oh she’ll just always open for us…”  And then she became the biggest star in the world in like no time.

What was the craziest moment of that tour that comes to mind?

Tranter: I did morning TV in Berlin, where everyone of course was speaking German… I had an earpiece in my ear, where someone was translating everything for me – which I don’t know if you’ve ever experienced that, but it was the trippiest thing ever… and then they made me play with a dog, and then they made me cook…  Then the translator just stopped talking, and I didn’t know what was going on, so I just kept saying, “I don’t know, I don’t know…”

Crean: Oh Stevy’s got a good one… We were playing Radio City Music Hall and he decided that it was time to set his guitar on stage and let it feedback, and then run around the entire theater… So the kid throws the guitar on the ground, runs, climbs over all the bleachers on the way back – this is in the middle of the show – then the security guard thinks that he’s just a fan trying to jump on the stage, tries to tackle his ass, but he’s too quick… Stevy gets on just in time to shut off his guitar, and then Justin did a cartwheel off stage, ripped all the staging down, and we almost got a $30,000 fine!  Knocked down all of Gaga’s wireless, knocked down the whole fucking rig.  After the show there was a line of policemen, and riggers, and management all waiting to tell us how much they hate us.

How many SPW tattoos have you seen?

Tranter: Well of my face, I think I’ve only seen about 10… There’s this girl, she got it in honor of our new album.  When it came out, she went to the tattoo parlor and got our old album tattooed on her arm… In my handwriting it says “You love you” on her bicep.

Whittle: There’s a girl named Kyra Walsh who is a great great fan, who send me random Photoshopped pictures of me with toast on my head..?  For some reason when she looks at me, she sees a guy who needs toast on his head.

Let’s talk about the move from New York to L.A., who made that decision?

Whittle: We never had an actual conversation… We checked into a hotel and after like two weeks, we were just like, ‘How much is this costing our band..?’

Tranter: …but the reason we came here initially was to meet with [producer] Tricky Stewart because we love the records he’s produced and written.  So we came here to meet with him, not to move here, but just to meet with him, and we never left.  We just lived here accidentally… but we love it; thank God because not only is L.A. wonderful and The Strip is wonderful, but L.A. is much more affordable then New York, and if we were all still living in New York, the band would’ve been over because everyone would’ve had to get daytime jobs/full time day jobs again… There would be no way we would’ve survived.

We left New York in 2009, for a tour that was supposed to be for three weeks with Ladyhawke and Ida Maria and we never come back.

Whittle: The first year here, we literally spent 363 days at Duke’s (Duke’s coffee shop on The Sunset Strip, 1968-2012).  For at least a week and a half, all my worldly belongings were in the closet with the DJ shit, and I was brushing my teeth in the bathroom every day, eating breakfast, lunch and dinner there.

Whittle: To be honest with you when we went to The Strip, we had the same amount of fun that we would have in the crazy parts of New York.  I think that’s one of the reasons why we felt okay with coming here.

Crean: I mean Cole spray painted his dick shut at The Viper Room…

Whittle: That was before I shit my pants at the Mondrian and gave them to Stevy to wear on a date…  Literally!  I had a good week that week [laughter]…

I was fucking around in Johnny’s Booth (the green room) at The Viper Room, and there was this can of black spray paint, and I was doing this dance in my underwear, so I decided to spray paint them [laughter].  And so I’m dancing around, and all of a sudden literally the underwear started to burn off, and it went through to my skin, and I was grabbing bottles of water, and I was butt-naked throwing water all over my junk; and then our tour manager opened the door – not thinking anyone was in there – and I’m doing this hot tamale dance pouring bottles of water all over my junk.