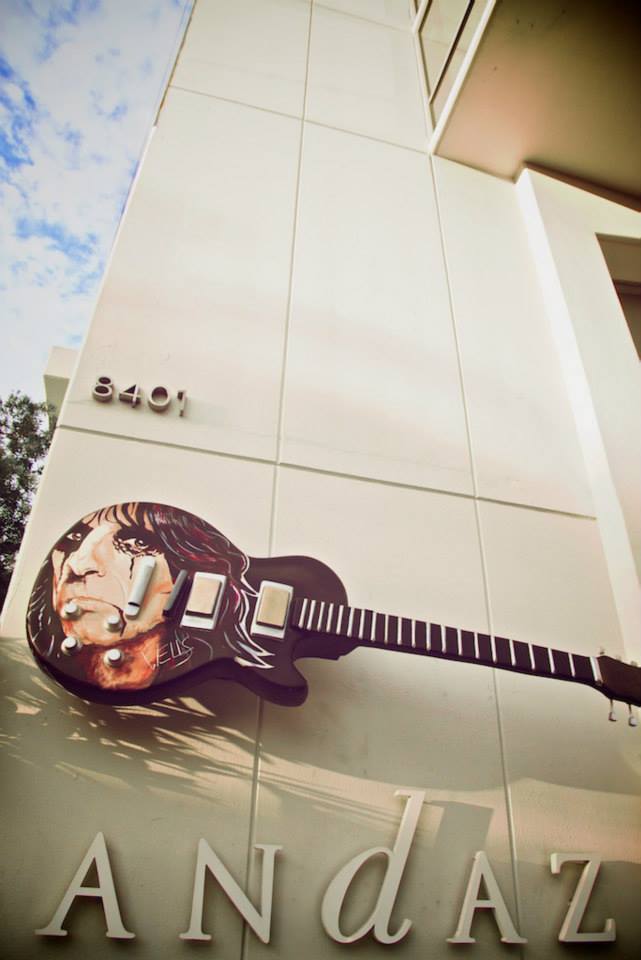 Get ready to place your bids! The 2013 round of 10-foot tall Gibson guitar art sculptures that have lined The Sunset Strip will end their tour on Friday, February 21, 2014, when they are auctioned for charity at a gala event at Bonhams in Los Angeles. This is the third installment of the annual public art project, and all proceeds from this auction will benefit Music For Relief, the nonprofit organization founded by members of Linkin Park to support disaster relief, provide aid to survivors of natural disasters and support the prevention of such disasters via environmental programs.

The auction will be open to the public, with previews on February 20 and 21 from 12:00 – 5:00 p.m. each day at Bonhams (7601 West Sunset Boulevard, Los Angeles). The charity auction will begin at 8:00 p.m. on February 21. An online catalog featuring the star studded guitar lineup will be available for review.

The Gibson GuitarTown on The Sunset Strip project originally launched in 2010 with 24 art guitars celebrating artists including Slash, Ozzy Osbourne, The Runaways and Mötley Crüe. These guitars were auctioned for charity in 2011 with 100% of the $54,360 in proceeds benefitting local charities Los Angeles Youth Network, West Hollywood Arts & Cultural Commission and West Hollywood Library.

– Mike Shinoda, “Soldier In Repose”
Acrylic and spray paint. Linkin Park’s first shows ever were played on Sunset Boulevard. In this illustration, the band’s iconic “Hybrid Theory” soldier is shown in a moment of reflection. (Performed at The Roxy, House of Blues Sunset Strip.)

– Lyle Tuttle & Mark Phillips, “Tribute To My Friend, Janis Joplin”
Mixed media guitar celebrating the colorful music career of Janis Joplin. The design features her portrait, signature, tattoos and other mementos of her life. (Performed at the Whisky.)

To view or download a map and photos of the guitars, visit http://bit.ly/GTown2013map. For more information, please visit dev.thesunsetstrip.com/guitartown or www.bonhams.com. A gallery of guitars on location is also available on Facebook.