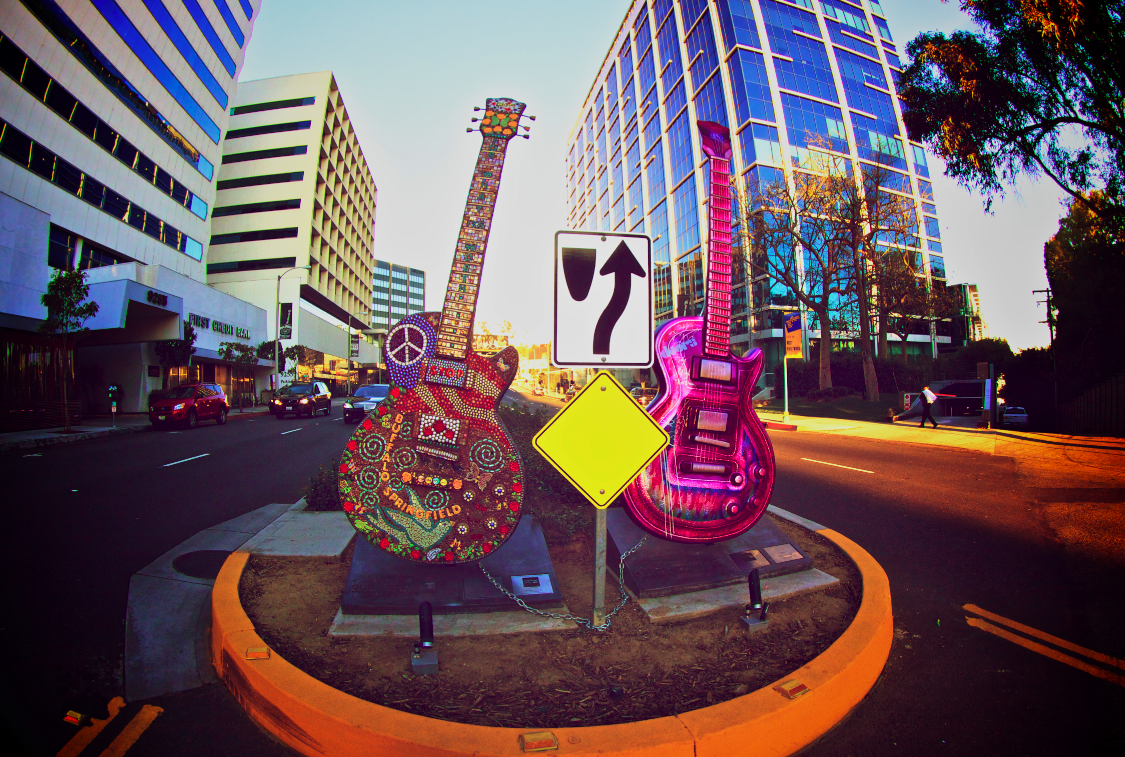 The Gibson GuitarTown on The Sunset Strip public art project, which includes works by Shepard Fairey, RISK, John Kosh and Tristan Eaton, will end its year-long tour on Friday, February 22 when the art guitars are auctioned for charity. The gala event will take place at Bonhams in Los Angeles with all proceeds from the auction benefiting the Los Angeles Fund For Public Education's "Arts Matter" campaign, which supports art and music education in L.A. public schools.

The auction will be open to the public, with previews on February 21 and 22 from 12:00 – 5:00 p.m. each day at Bonhams (7601 West Sunset Boulevard, Los Angeles). The charity auction will begin at 8:00 p.m. on February 22. An online catalog featuring the star studded guitar lineup is available at www.bonhams.com/auctions/21265/ for review.

Gibson GuitarTown on The Sunset Strip originally launched in 2010 with a range of guitars that celebrate musicians and personalities who have influenced the boulevard. These guitars were auctioned in 2011 for charity with 100% of the proceeds benefitting local charities Los Angeles Youth Network, West Hollywood Arts & Cultural Commission and West Hollywood Library. The 2012 edition features 18 art guitars created by internationally acclaimed and local artist and celebrates musicians and artists who have influenced The Sunset Strip, including The Doors, Buffalo Springfield, Stevie Nicks, British Rock Invasion and Van Halen, among others.

The Los Angeles Fund for Public Education is a philanthropic organization dedicated to driving positive change in the Los Angeles Unified School District. Founded by LAUSD Superintendent John Deasy and philanthropist Megan Chernin in 2011, the LA Fund supports ideas that can make a dramatic and direct impact on kids’ lives and make sure those ideas have the support to be permanent. The LA Fund for Public Education recently launched the "Arts Matter" campaign to revitalize arts education in the nation’s second largest school district. Arts Matter brings together the world’s leading artists and thought leaders (celebrities, Fortune 500 CEOs, policy makers) to drive public awareness for the critical role of arts education in public schools. Each day LAUSD serves nearly 1 million students from Pre-K to adult, nearly 80% of whom live in circumstances of poverty. With more than 1,000 school sites spread over a 710 square mile attendance area, few public agencies in the world impact so many lives.

"We are grateful that the Sunset Strip Business Association and the Gibson Guitar Foundation chose the LA Fund as the beneficiary of the GuitarTown Auction," noted LA Fund executive director Dan Chang. "With our Arts Matter campaign underway, we couldn't be more proud of this partnership. With the support of the SSBA and Gibson, we will look forward to bringing the arts and creativity to West Hollywood and Los Angeles public schools."

For the full list of guitars, including a map, please visit dev.thesunsetstrip.com/guitartown. The guitars will remain on The Sunset Strip through February 17.