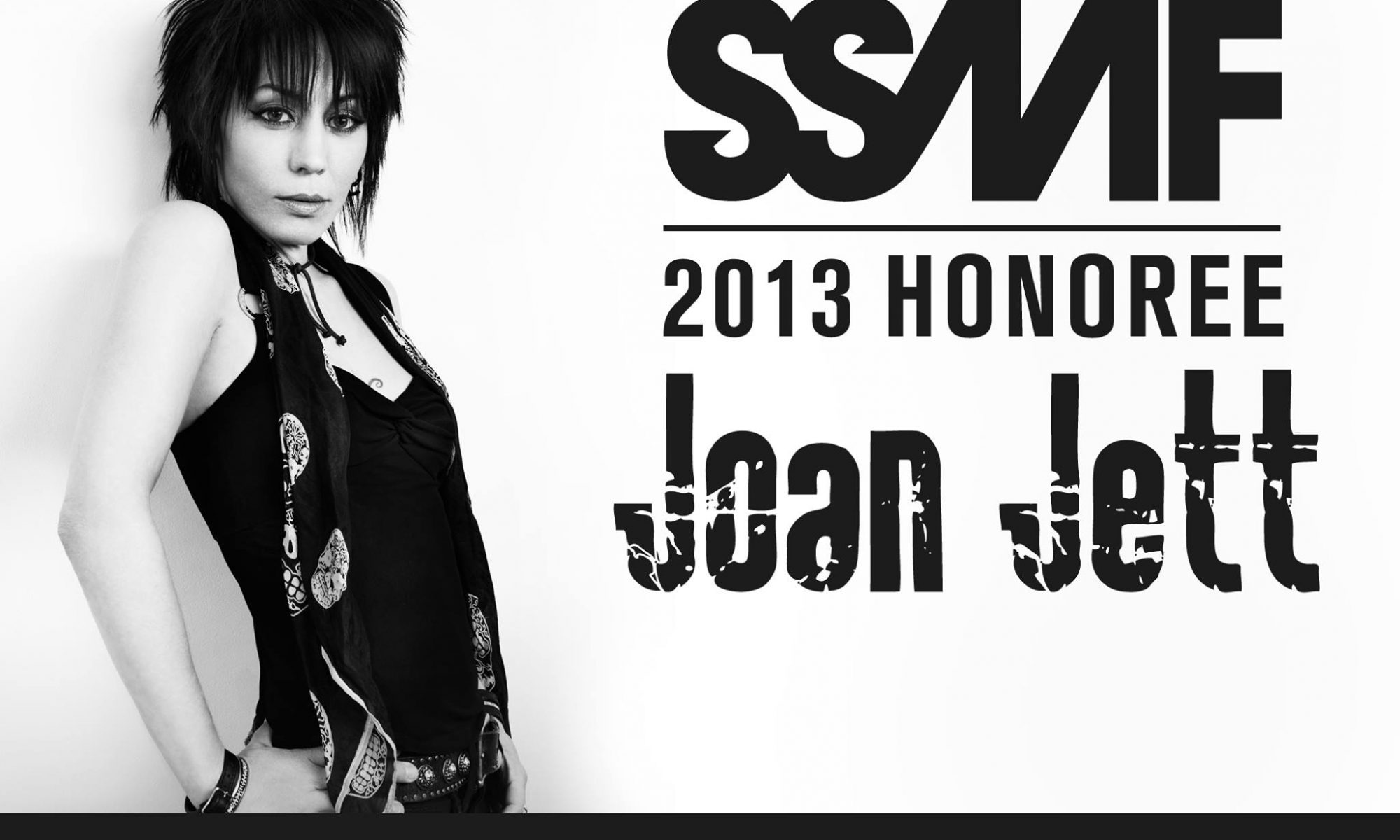 Multi-platinum selling, iconic rock goddess Joan Jett has been selected as the 2013 Sunset Strip Music Festival honoree! Since co-founding the pioneering all-girl punk quintet The Runaways at age 15, Jett has continued to be an originator, innovator, visionary–and a pivotal figure in the history of The Sunset Strip.
“I actually lived on The Strip, right across the street from the Whisky,” said Jett. “The Sunset Strip is a piece of rock ‘n roll history.  I never thought all of those insane times would turn into an award, but I’m very honored, and inspired to keep making music.”
As with previous SSMF honorees, Jett will be celebrated at an exclusive VIP event Thursday, August 1 at the House of Blues Sunset Strip, kicking off the three-day music festival. There she will be presented with the coveted “Elmer Valentine Award” and, immediately following the tribute ceremony, lucky attendees will enjoy a full live performance by Joan Jett & the Blackhearts. Tickets for the event are extremely limited; see info below. In addition to the VIP reception, the City of West Hollywood will honor JETT by officially proclaiming Thursday, August 1 “Joan Jett Day.”
This marks the sixth installment of the award ceremony and SSMF, which celebrates the music and icons that have made an impact on the legacy of The Strip. The event debuted in 2008 with the recognition of Lou Adler, Mario Maglieri and Elmer Valentine, founders of cornerstone Sunset Strip venues The Roxy Theatre, Rainbow Bar & Grill and Whisky A Go-Go. In 2009, Ozzy Osbourne received the “Elmer Valentine Award,” which was thusly named after the passing of original honoree Valentine. The 2010 award went to Slash, in 2011 Mötley Crüe was recognized, and in 2012 The Doors were celebrated.
“It is my honor and pleasure to take part in inducting the first female music superstar, Joan Jett, to the exclusive group of Sunset Strip icons to receive the coveted ‘Elmer Valentine Award,’” says SSMF Festival Managing Director Karmen Beck. “We are delighted to celebrate Joan Jett who has so much influenced the history of the legendary boulevard.”
As the leader of the hard-rocking Blackhearts, Jett has had eight platinum and gold albums and nine Top 40 singles, including the classics "Bad Reputation," "I Love Rock 'N' Roll," "I Hate Myself For Loving You," and "Crimson and Clover." She rose to fame in the late ‘70s, performing on The Sunset Strip as part of the all-girl band The Runaways. Jett was recently able to see her story told in The Runaways, a film based on (lead singer of The Runaways) Cherie Currie's book Neon Angel and starring Kristen Stewart as Jett, and Dakota Fanning as Currie. Jett was close to the project, serving as an Executive Producer.
Additionally, Jett sits at the head of her own independent label, Blackheart Records, produces various music projects for others, and has acted in movies and television, including 1987's Light Of Day, and in the Tony-nominated Broadway musical The Rocky Horror Show.
The sixth annual three-day music festival officially gets underway with the 2013 honoree award presentation and tribute event on August 1 at the House of Blues Sunset Strip, followed up with special high-profile shows in the world famous music venues on The Sunset Strip Thursday and Friday nights, and culminates on Saturday, August 3 with a 3-11 p.m. street festival.
Tickets for the SSMF 2013 street festival are on sale now via the official ticketing provider, Eventbrite, at sunsetstrip.eventbrite.com. As previously announced, a significant portion of this year’s ticket sales will benefit Music For Relief, a nonprofit organization to support disaster relief, provide aid to survivors of natural disasters and support the prevention of such disasters via environmental programs.
For more information, visit www.ssmf.com.