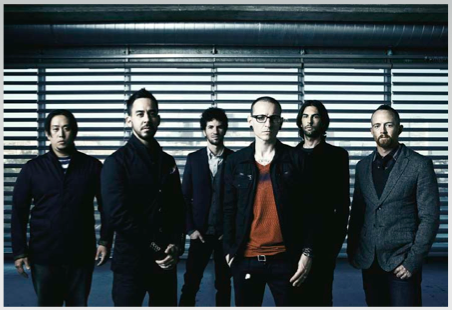 We have some exciting news to announce this morning! The 2013 Sunset Strip Music Festival will feature a headlining street festival performance by Linkin Park on Saturday, August 3! The Grammy Award-winning and multi-platinum California rock band and SSMF are partnering to create a unique festival experience that will let attendees “rock for a cause” with a significant portion of ticket sales to benefit Music For Relief, the nonprofit organization Linkin Park founded to support disaster relief, provide aid to survivors of natural disasters and support the prevention of such disasters via environmental programs.
Linkin Park–Chester Bennington, Rob Bourdon, Brad Delson, Dave “Phoenix” Farrell, Joe Hahn and Mike Shinoda—are excited to perform at SSMF as it marks a return to their roots as the band’s early career began in The Sunset Strip’s venues, including The Roxy Theatre.
"We started our career playing clubs on The Strip," said lead vocalist  Bennington. "It’s a thrill to be back where it all began, headlining this festival in our hometown."
The performance also marks Linkin Park’s only North American performance for the remainder of 2013, as well as the band’s first performance in Los Angeles since May 2012, when they performed an intimate benefit show at the House of Blues Sunset Strip.
The band's current single, “Castle of Glass,” the third single from their latest album Living Things, has just entered the Top 30 on the Alternative radio chart. Since Linkin Park debuted on the Billboard 200 in 2000, no other artist has had more Top 10 singles on the Alternative chart or achieved more number one albums this century.
Tickets for the SSMF 2013 street festival are on sale now via the official ticketing provider, Eventbrite, at sunsetstrip.eventbrite.com. Ticket options include general admission August 3 street festival ticket for $79 and a VIP option for $145, which includes access to the rooftop VIP area with views of the West stage, VIP areas in the beer garden and venues, access to VIP lounge On The Rox, a separate entrance and additional perks.
As in years past for the Saturday event, Sunset Boulevard will be closed to traffic between Doheny Drive and San Vicente Boulevard and transformed into a premier concert destination with two outdoor stages, beer gardens, an artist autograph tent, an outdoor VIP rooftop lounge, silent disco, VIP Lounge at On The Rox, food trucks and interactive experiences.
The three-day festival will take place August 1-3 on The Sunset Strip. Additional artists as well as the 2013 honoree will be announced in the coming weeks.
For the latest Sunset Strip Music Festival news, visit SSMF.com, , like Facebook.com/sunsetstripmusicfestival and follow Twitter.com/SSMF.