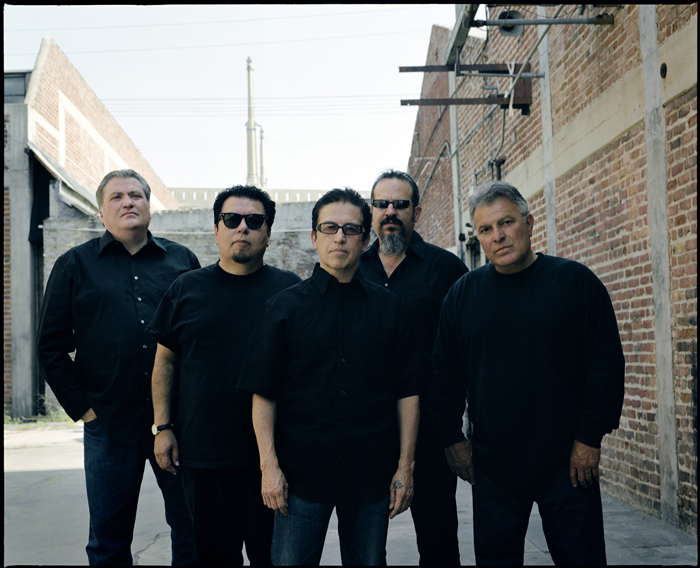 No impartiality here; I love Los Lobos. They’re a Los Angeles institution, and one of the world’s most consistent and enduring rock bands. Together almost 30 years, the band still rocks and has never lost touch with its roots.

The House of Blues was rocking on Friday, Dec. 12, with two private parties upstairs, as well as a full house with DJ in the Foundation Room. The restaurant, which just keeps getting better, was hopping, too. And with a heavyweight act in the main room, the night’s energy just kept building. After checking out another L.A. rock and roll icon, Dave Alvin and The Blasters, who were upbeat and really set the party mood, we went up to the Foundation Room for cocktails and to drink in some more of the evening’s flavor.

The room was buzzing, and the DJ was bringing hip-hop booty style. No dancing, yet, just a smattering of polite semi-rhythmic gyration, but the December Elite was hanging in the upper dining room so it was a safe bet the night was going off sooner or later. We finished off our respective drinks and took those wooden stairs with the stellar view of the city down to the big room for the main event.

Los Lobos began a little after 10 p.m., and they were in great form, as usual. The main room is divided into three sections, and you can choose how close to the music you want to be, or back it up a bit to hang out more socially at the bar in the back. The dance floor in front of the main stage was pleasantly packed with fans that were in for a treat. The band opened by alternating tracks from its The Town And The City album.

Classics “Maria Christina,” “That Train Don’t Stop Here” and “The Neighborhood” were joined by the newer “Luna” and “Don’t Ask Why.” After all these years, the band has balanced its ability to present prime material that their fans know and love — save for “La Bamba,” which apparently only comes out on special occasions — with a sense of showmanship. Being a great rock band comes with its own set of expectations, and living up to them is part of the process when providing a great show for your fans. Blowing those expectations away is the other part.

By the time David Hidalgo picked up his accordion for the opening strains of “Kiko And The Lavendar Moon,” the band already had the crowd dancing and celebrating, so phase one was complete. They kicked it into overdrive on the next three songs, including “Don’t Worry Baby.” Then Blasters’ singer Dave Alvin joined them on stage for vocals and a little guest harmonica to make it a full-blown party. Alvin’s passionate singing and energy was a great counter-point for Los Lobos’ strong, controlled musical thunder. Great to see two of L.A.’s own on stage together.

After two encores, the main show concluded downstairs, so we took it back up to the Foundation Room for drinks and to check in on the hip-hop and December Elite. True to form, the crowd had stayed, and so did we until closing time.

It was a great night with fantastic entertainment of all kinds from top to bottom at the House of Blues on Sunset Strip. With one of the all time best rock and blues bands in the House, we experienced this legendary venue in top form.