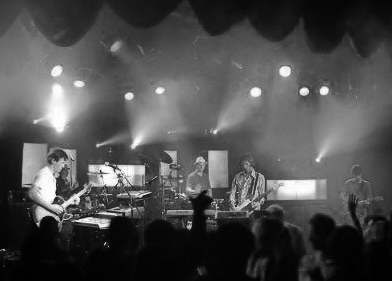 I’ve loved The Roxy Theatre and its neighbor, the Rainbow Bar & Grill, ever since my first visit back in the ’80s. My girlfriend and I were grabbing dinner at the Rainbow before an event at the Roxy, and David Lee Roth stumbled past our table, spilling over the saltshaker. After a ten-minute confessional from the Dave, we all tossed some salt over one shoulder and got back to rock and roll.

A couple of decades later, the salty luck remains, and the Rainbow and Roxy continue to rock it on Sunset Strip. Last Thursday, Oct. 16, I joined my friend Rob and a group of his jam-band diggin’ friends for a triple-bill at the Roxy with groups Blvd., Region of Darkness and headliner Lotus. Following a solid set by the electronic-fused-with-rock-and-soul of Blvd., Region of Darkness took the stage and delivered a moving performance of post-electronic rock.

Following two top-notch performances, Lotus took the stage and delivered an outstanding two-hour set that had the crowd rocking and grooving from the first minute to the very end. A jam-band in the vein of Widespread Panic and String Cheese Incident, Lotus is an instrumental experience with serious peaks and very few, if any, valleys. The band has been touring the states and promoting their newest release, “Hammerstrike.”

The crowd was young and groovy, with more flower-power than the usual Roxy rock and roll night. I spotted Kevin Connolly of “Entourage,” who seems to be spending even more time on the Sunset Strip after opening new restaurant Cristoni Pizzeria with partners NBA stars Sam Cassell and Cuttino Mobley.

The Lotus show was a throwback, of sorts, to good, old-fashioned musical virtuosity, taking the audience on a danceable journey highlighted by outstanding musical moments, rather than wacky costumes or crazy histrionics. The band’s talent and cohesiveness was the beef, and it makes for a meaty and satisfying live show.

After the show, Rob and I dropped by the Viper Room for a little underground vibe and some entertaining people watching before heading back across town.