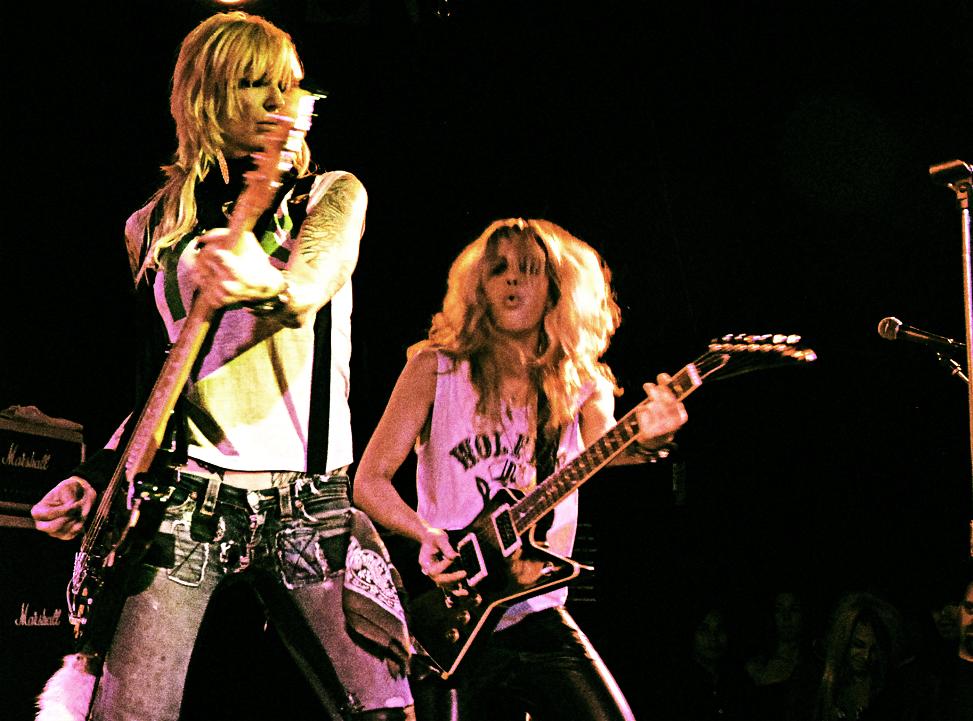 It was the third show of Chelsea Girls ongoing monthly residency at The Roxy Theatre and judging by the line down the block, word had spread of the band’s blistering performances.

Comprised of some of the most talented ladies of rock, it’s no surprise that the droves have been turning out for this super sexy all-star cover band. Hosted by Carmen Electra and DJ’d by Riki Rachtman of “Headbangers Ball” fame, the night kicked off with a raucous set by local Hollywood buzz band and flat iron friendly youngsters Prima Donna.

The band set the tone for the heavily drinking patrons as lead singer Kevin Preston continuously doused himself with tall cans of Miller Light in a shameless effort to get a rise out of the crowd. By the time Chelsea Girls hit the stage the audience was definitely “in good spirits.”

The darkened stage lit up with the opening guitar stutter to Guns N’ Roses’ “Welcome To The Jungle” and the audience erupted with excitement. With her trademark fan-blown hair, Samantha Maloney (Hole) precisely held together the percussive bridge of the perfect opener for a set that would be chock-full of rock and roll favorites.

The blonde quartet, dressed in all white attire and jamming in front of a wall of white Marshall stacks kept the momentum at a feverish pace, following up with the Heart classic “Barracuda.” As Allison Robertson (The Donnas) and Corey Parks (Nashville Pussy) strummed out the chugging hook, lead singer Tuesdae did justice to the song’s high frequency falsetto as she leered at the crowd from under her doll-like platinum bangs.

Midway through the set, the band was joined by late ‘80s pop princess Taylor Dayne for a duet cover of the Joan Jett anthem “I Hate Myself For Loving You.” This was the first of a string of guest appearances that seamlessly filled out the nights set. Later joining the band was Carlos Cavazo (Quiet Riot) who lent his signature guitar sound to “Bang Your Head (Metal Health)” as Tuesdae playfully dawned the silver mask from the album’s memorable cover.

As if that wasn’t enough to satiate the crowd, many of whom were in their prime during The Strip’s hair metal, glory days, the special guests just kept on coming. The definitive high point of the evening came with a near Ratt reunion. As they ripped through “Lay It Down,” the girls were joined by singer Stephen Pearcy and guitarist Warren DeMartini, who was promptly treated to cake and a song to celebrate his birthday.

Chelsea Girls rounded out their set with an exaggerated start, stop version of Motley Crue’s “Live Wire,” which gave Maloney the chance to show off the skills she perfected while touring with the original band. As Tuesdae marched the show to a close with AC/DC’s “Dirty Deeds Done Dirt Cheap,” it was clear what the fist-pumping crowd not only loved the classic songs but appreciated the skilled musicianship involved in reproducing them.

The Chelsea Girls will perform May 7 at The Roxy Theatre with Trainwreck (featuring Kyle Glass of Tenacious D) and JAPS. Visit www.theroxyonsunset.com for more information.