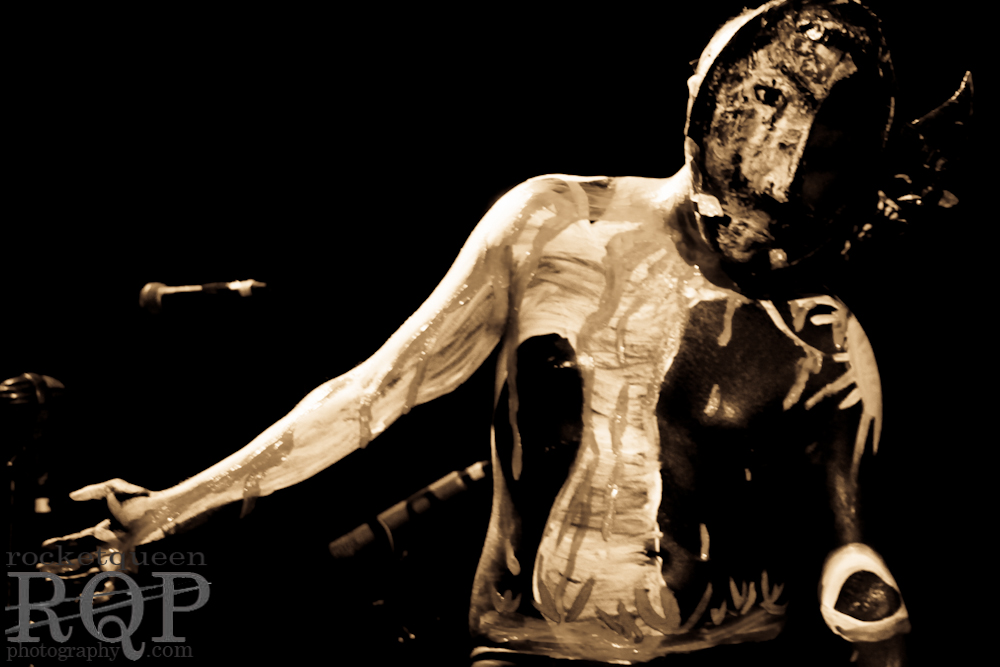 Australia born, avante-art band The Red Paintings have been circling the globe for well over a decade, bringing their orchestral rock sound and all encompassing mixed media stage shows to the spellbound masses. Currently on tour to support their soon to be released sophomore album, The Revolution Is Never Coming, the band and their human canvases recently stopped by The Sunset Strip to perform an intimate, stripped down show at The Roxy Theatre.
Before hitting the stage, TRP frontman Trash McSweeney sat down with TSS.com for an enlightening discussion about the forthcoming record, mid-show paint pandemonium and what it’s like to literally hear colors.
So the band often gets billed with a wide range of very diverse musical acts, from Trail of Dead to Cherry Poppin’ Daddies. I imagine it is kind of hard to find tours with like-minded acts?
Well that’s sort of the beautiful thing about the band, is that we can play with so many different acts – like we played with Mars Volta’s side-project [Omar Rodriguez Lopez Group] in Europe a few months ago, which was awesome and we just did the Mindless Self Indulgence tour in America and now doing the UK and Europe with them as well.
Is it challenging performing in front of some of these audiences?  Do you ever feel like you’re sort of having to win people over?
You definitely get people who just think we’re a bunch of weirdoes and don’t get it. Usually that’s the time to stop the set and just talk to the crowd about art and our background…  We invite people to join us on stage and paint with us, tell us who they are…and the next thing you know, they seem to really warm up to us.
We’re definitely not the type of band trying to be rockstars. We’re trying to get people to have an experience and create a community – a harmony between art and music.  It works well for us.
You have a new record coming out October 1. Want to tell us about that?
It’s called The Revolution Is Never Coming and it’s taken me five years to make. It was a massive ordeal, and a complete nightmare. I worked with orchestras, choirs, Theremins… Everything was naturally tracked; we wanted everything to be analog.
So while it was a bit of an undertaking, we finished it and the reviews have been coming out. Rolling Stone gave us four out of five…so I think in this day and age, it does pay to spend a little bit more time to get that vision in your eye right, ‘cause people really notice the production and whether you’ve gone that extra length or not.
And the title?
Simply what I was trying to do is tell people that if you want to create a revolution in this world, get off your ass and create it yourself… ‘cause if you’re expecting everybody to do it for you, it’s not going to happen.  And that’s why the revolution won’t come, because human beings won’t allow it to.
For those that don’t know, you have a condition called synesthesia, where you experience music as colors, and this was sort of the foundation of the band.
In a nutshell, yeah. I was looking at artwork and finding the colors that were created in the brushstrokes and the different shadings, and I would find corresponding chord combinations on violin and guitar, and that’s how I would create the compositions…
And then eventually I realized that orchestras’ spectrum of color in my head was incredible! Same with records from bands like say Bjork or The Arcade Fire. I listen to that music and there’s just so much color… Funny enough, I’ve been told Bjork, as well as Jimmy Page, also have synesthesia.
It’s all about emotion… I think everyone out there subconsciously sees and feels things in color. For me it’s just kind of my conscious mind; I see it more clearly.
Now at every show you invite people from the audience on stage to express themselves artistically. What’s the strangest thing that’s happened, unrehearsed?
Where do I start. Well, not so long ago a guy got on stage and said, “This is who I am!” And he took his pants down and he did a big crap on the canvas and rubbed it in.  And we were like, “Holy crap, pun intended!”
And another time a person got on stage grabbed the paint and the brushes, ran outside and started painting cars… We had another person that painted the bottom of their shoes and ran around making footprints, saying “This is who I am!”  We really bring the best out in people. [laughter] Venues don’t like that though. We’ve had plenty of venues say that we can never play there again.
So now we have a bit more of a controlled stage show. We actually have people submit their artwork, and do a little bit of a background check. You kind of have to nowadays.
Finally, you’ve played The Sunset Strip a few times here at The Roxy.  Any crazy post show experiences you’d like to share?
I remember one time we went to the Rainbow next-door after the gig, and Rage Against The Machine were there… And our human canvas embarrassed himself and jumped on the table saying, “Hey, I’m the human canvas for The Red Paintings!” And their manager was like, “Hey, I know The Red Paintings. They’re cool!” So that was very exciting.
—-
The Red Paintings’ new album The Revolution Is Never Coming will be released October 1 in the U.S.  www.theredpaintings.com  www.facebook.com/theredpaintings
Photos courtesy of Jessica Pix, RocketQueen Photography
—Brent X Mendoza