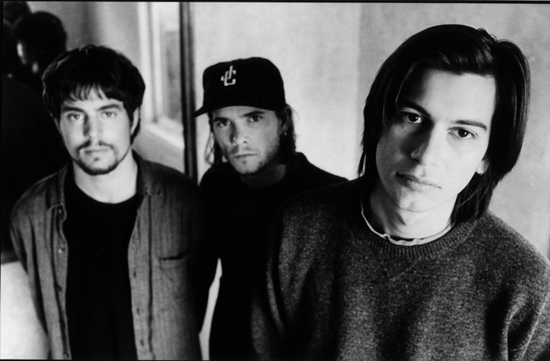 Officially disbanding in 1997 on the cusp of a career that was about to skyrocket into the stratosphere, L.A. based underground legends Failure have consistently maintained a mystique and word-of-mouth cult following for the past 16+ years.

In the short nine months since their reunion, the band has already garnered a direct support slot touring with longtime musical brethren Tool, co-headlined two nights at The Greek Theater for Cinquanta, and wrapped their own nationwide headlining tour.

Now in preparations for taking the stage in the middle of The Sunset Strip, Failure and guitarist/founding member Greg Edwards is looking forward to finally giving longtime fans the chance to hear live, the songs they’ve been incessantly playing on repeat for over a decade.

Going back to around 1997, with Fantastic Planet coming out and the “Stuck on You” single taking off… you guys were on Lollapalooza and touring with Tool… What happened?

The thing is that we finished the record so long before it was actually released, so the whole process of making the record and then ending up with this thing that we’re really proud of… and then we just waited a long time.

Through the process of recording, it wasn’t the healthiest environment for interpersonal dynamics in the band.  Although in some ways, it was a healthy environment creatively because the unhealthy things were actually feeding the creativity… So that bad stuff had started during the recording process, and then we just had this long period of time before we knew if the record was coming out, or what was going on and it…

So were there a lot of interpersonal animosities that had to be worked out during this hiatus?

I’m sure there were, but it was never really talked about in a therapy type setting [laughter].  A lot of time had passed and we were in completely different points in our lives… Ken and I always got along, we always had a good time together, we always laughed a lot, and sure we had some intense creative tensions, but that’s all good in the end.  So that main foundation of our relationship just quickly came right back.

And so you went on to do Autolux which has been pretty successful, but were there always sort of those ‘what if’ questions lingering in the back of your mind?

No I didn’t do a lot of looking back.  I guess Failure could have continued on, and we could have made a record that somehow popped in that environment; but I don’t even know that all things considered, from the big view, that that would have been the best thing for the music or the art of what Failure is.

I think it was sort of the ultimate thing that could’ve happened, for people to listen to, and fully digest, and fall in love with that record.  You know, we didn’t tarnish it by trying to follow up with a record that was gonna hit, which is what I felt was happening to the band.  I felt like the pressures that were on us from the outside were pushing us in that direction.  So in a way, I am grateful for the way things turned out, and we’re back now, and now we can do a proper follow up to Fantastic Planet.

Because of the amount of time that’s elapsed, do you feel like there’s even more pressure now to put out a well received follow-up than maybe there might have been at the time?

I feel like it’s all good pressure; there’s zero commercial pressure, there’s zero pressure from that ‘old system’ that we were under then…  There was a lot of money at stake, there were all these people fearing for there jobs, you know it was kind of a disgusting environment – the record industry; and you know that pressure trickled down to the artist, no matter how much people were trying to shield them from that.  And they really weren’t trying to shield them at all, because they were all too fearful for their own jobs and positions; so the art of something just got totally lost most of the time.

And that pressure doesn’t exist at all now.  Now the pressure is that we have this following of people that have stayed with us over all these years, and they are experts.  They’ve got bullshit sensors probably more finally tuned then ours, so we’re not gonna get away with just throwing something together; it’s got to be the real thing.

What sparked the reunion; was there a catalyst?  Who sort of reached out first?

It was over years of Ken and I hanging out… Ken sort of made a few comments to do something here and there… It was always around, but I was definitely not ready to do anything at that point because I was too involved with Autolux at that time… And then we just kept hanging out, and we eventually got back around to this idea, and I had some time and we just kind of tried it, and it immediately just worked and it was easy.  The result was something that had real value; and then it was just unstoppable at that point

Yeah I mean we all knew that we had a small core of very intense fans, and that’s kind of one of the main reasons – aside from just doing it for ourselves – we wanted to do this for that core of people who really got the music and stayed with us this long.  But, when we booked the El Rey we were thinking you know, ‘Is this place too big?  Should we go smaller?’  So we had no idea… There were some people – some agents and people like that – that told us we could do even more then the El Rey, and we thought they were nuts because it seemed crazy. We weren’t expecting that at all!

Are there any specific songs from Fantastic Planet that you’re particularly excited to finally get a chance to share with people?

I always have fun playing all of it, but I don’t always have that much invested in the more “pop” oriented songs, like with the choruses and everything… But we’re doing a song from Magnified which is one of my favorite Failure songs of all – the last song called “Small Crimes.”  I really like that song, and you know songs like “Solaris” and “Blank” and “Heliotropic” – that side of things is always more interesting to me.

I know Maynard from Tool has been sort of instrumental in getting you guys on some bigger gigs since reuniting… Can you talk a little bit about your relationship and how you met?

We met Tool early on before they broke really, they were just another band in L.A. that was getting some attention – as were we – and then we became friends with them. They were all cool, creative guys and then we went on a tour with them right as their first record was being released. We did this tour of Europe, of France really, it was an amazing tour!  Small clubs all down through France to the border of Spain just about and it was beautiful… But right as that was going on – we were playing these small clubs of 200-300 seaters and sometimes only 100 people were there – “Sober” was exploding in the U.S.  But we always had a great time with them, and Maynard has always been a real supporter of Failure and also Autolux, and he’s always been great that way.  And he makes wine!

Now coming up SSMF…  Do you have any particular Sunset Strip memories and/or thoughts relating to Failure or any of your other musical endeavors?  I know Kellii (drummer Kellii Scott) used to work at The Viper Room…

One thing I do remember about The Sunset Strip was seeing My Bloody Valentine at The Roxy.   It must’ve been around 1994ish..?  They did two shows in one day, and it was the loudest thing anybody had ever heard.

Yeah I remember that, and I remember Failure played a show at the Whisky towards the end… The Roxy and The Whisky are great sounding clubs that have definitely gained a certain patina over the years.