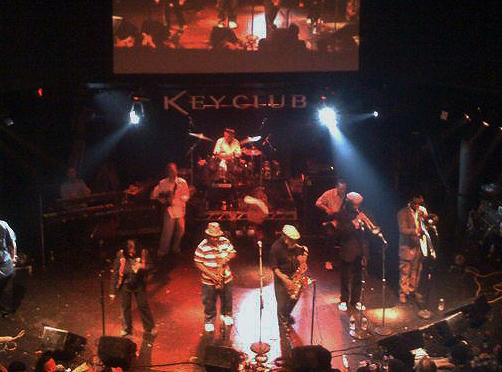 The Skatalites returned to the Sunset Strip for another sparkling set of horns-infused ska on Oct. 19. Their sound – still super-rich and infused with the wisdom of the ages – is the deepest because it’s the original and the brightest, thanks to those blazing horns.

The original ska band of Jamaica opened its set around 11 p.m., and the good time, happy ska-skiffle dance-around ensued for nearly two hours. The band is funky, groovy, tight and joyous at the same time. Having played many of the venues on the Sunset Strip at some point – Whisky A Go-Go, House of Blues and now the Key Club – the band is a Strip perennial, as well as a reggae ska legend.

The Skatalites lineup has changed over the years, 44 of them to be precise, since the band first hit the state in 1964. Originally an 11-person outfit fronted by Don Drummond, Tommy McCook and Roland Alphonso, today’s 10-some is led by the lone remaining original, Lester “Ska” Sterling, and includes vocalist Doreen Shaffer, who brings a sweet and spicy, Ella-style voice to the proceedings.

Gently building on the energy of the first few minutes, and bringing the crowd along with them, the band’s vibe is celebratory and positive. Not going so much for the dance, but for the groove, they inflate the room from the bottom up, rather than going for the over-the-top, jump and pump your hand of the more aggressive maestro.

Running from early classics to the mid-career success of “Skavoovee” (on Shanachie) the band also introduced new compositions from its latest release, On The Right Track. All instrumental and infused with real ska and the essence of true jaxx. On its way to a peak around the one hour mark, the Skatalites launched into its all-time classic, “Guns Of Navarone,” taking their fans and those new to the fold to the evening’s first great high.

That marked Doreen Shaffer’s entrance into the proceedings. She and Sterling led things for a while, and took the audience through original compositions and reggae classics infused with their brand of ska.

A highlight was Shaffer’s soothing version of “Take Me Home, Country Roads,” the John Denver classic using the reggae vocal arrangement by Toots Hibbert of Toots and the Maytals fame.