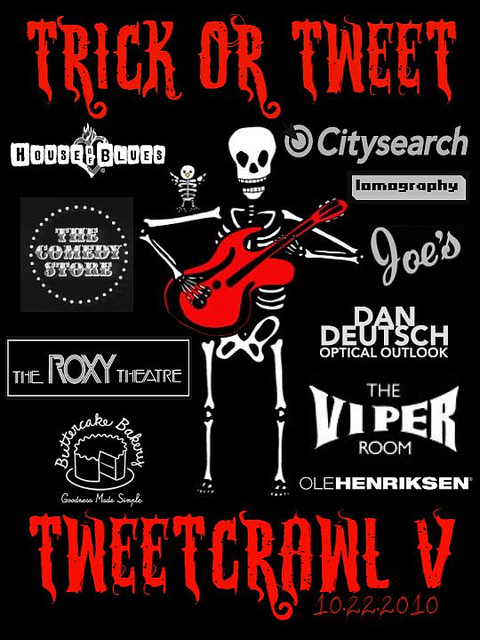 As All Hallows’ Eve inches closer and closer, we invite you to enjoy events that will make you scream with delight. Grab a devilish cocktail at "London After Dark", check out "The Lost Boys" with Corey Feldman and trick or treat on The Sunset Strip with TweetCrawl V. And don’t forget your costume. Skybar, Rainbow Bar & Grill, the Viper Room, Key Club and Cat Club are hosting Halloween parties, too.

October 22
TweetCrawl V: “Trick Or Tweet” on The Sunset Strip
Ghouls, boys and the occasional creep will gather for this spooky version of The Sunset Strip’s signature event! Put on your costumes and come knock on the doors of your favorite establishments to see what libations, grub, goodies and prizes they’ll be treating you to. The night kicks off with pumpkin carving and Halloween cocktails at The Roxy Theatre at 7 p.m. Other participating businesses along the TweetCrawl include the Viper Room, Citysearch LA, Joe’s New York Pizza, Dan Deutsch Optical, Buttercake Bakery, Ole Henriksen and House of Blues Sunset Strip. The night ends at The Comedy Store with guests enjoying Haunted Midnights and a flashlight tour of the most haunted building in Hollywood. Check out the full list of events and schedule.

October 24
“The Lost Boys Ball” with Corey Feldman and his band Truth Movement at House of Blues
The night includes a screening of the classic Lost Boys film, costume contest, themed dinner, a live Q&A session with Corey Feldman and other special guests and a performance by Feldman’s band, Truth Movement. Tickets range from $23 for GA, $45 for GA plus dinner, and $105 for a VIP package. This event is ages 18 and older only.  www.houseofblues.com

October 29
Halloween Weekend at the Whisky A Go-Go
The Whisky kicks off Halloween weekend with performances by The Wiseguys Big Band, Justin Kalk Orchestra, Substyle Experience, Radical Blood Orange and Ashes To Light. Tickets are $15 at the door. Doors open at 8 p.m. www.whiskyagogo.com

October 30
Halloween Party with Lonely Drunks Club Band at the Cat Club
Sunset Strip all-star band the Lonely Drunks Club takes over The Cat Club with Bolt Action Thrill and Sluggo. Get there early and enjoy happy hour from 7-8 p.m. with half-priced drinks. Ages 21 and older. (Insider tip: visit The Cat Club’s website and download a flyer for $5 entry). www.thecatclubonsunset.com

October 31
Halloween Dance Party at The Standard
Cork your fork, shine those cloven hooves and unlimber for your grand jeté or roger rabbit, because The Standard, Hollywood requires your presence under the disco ball this Hallows Eve. Bri & Brooke of J*Davey will entertain with a DJ set and live performance at midnight, while The LA Waackers will be throwing neo-vogue shapes and hosting the afterparty for the first annual waacking/punking dance festival. This is a free event! Call 323.650.9090 for table reservations. www.standardhotels.com/hollywood

October 31
DJ Shadow: Live From The Shadowsphere at House of Blues Sunset Strip
Influential DJ Shadow brings his signature sound to the House of Blues. Doors at 8 p.m. Tickets are $37.50 in advance. Ages 18 and older.
www.hob.com

October 31
Murderdolls at The Roxy Theatre
Break out the goth for the fully-charged metal and punk sounds of Murderdoll. Doors open at 8 p.m. Tickets are $15. www.theroxyonsunset.com

October 31
The Spazmatics Halloween Bash at Key Club
The ultimate New Wave ’80s show presents a Halloween celebration. All the awesome sounds, styles and way cool dance moves from the ’80s you may say you’d like to forget, but you love to relive. Tickets are $10. Doors open at 9:30 p.m. Ages 18 and older. www.keyclub.com