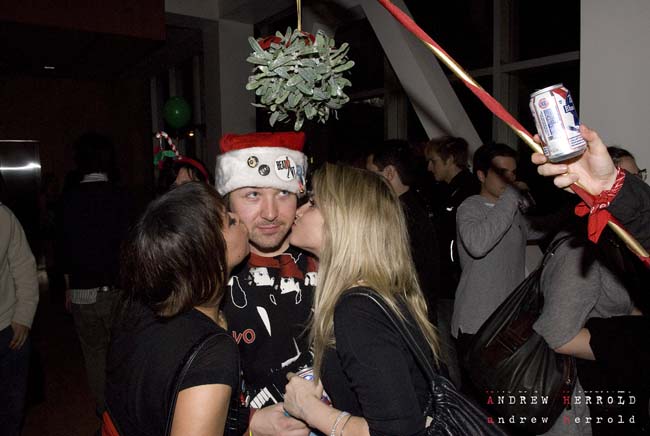 The date was Friday, Dec. 18. And while the rest of the country was trying to defrost from arctic blasts, revelers on The Sunset Strip were warm and toasty as they embarked on the third Tweet Crawl, this one featuring an amped up holiday party theme.

The Roxy Theatre, Viper Room and Comedy Store organized the initial Tweet Crawl this summer, and the self-titled “Social Strip” group has become known as trailblazing innovators in their use of social networking as a marketing tool and promoting The Strip as a whole.

Beginning just after dusk, the Tweet Crawl featuring “ugly holiday sweaters” kicked off at The Standard Hollywood hotel. Their chic retro-future backdrop set the tone for a long night of tasty treats and frosty beverages. Offering a special Tweet Crawl menu of holiday inspired cocktails and mini apps, The Standard was the perfect launch pad for this social soiree.

After meeting up with their fellow Tweeps and collecting commemorative buttons from each participating venue’s representative — which served as the “ticket” for the night — the crawl continued on to The World Famous Comedy Store.

Upon arrival at The Comedy Store, the crawlers were immediately seated in the Main Room and treated to holiday-inspired a capella carols from the Tinseltone Carolers (@Tinseltones). Contrasting the overzealous enthusiasm of the choral group was a set by Store favorite Ari Shaffir (@Arishaffir), whose FML stories played well with the “been there, done that” L.A. crowd. The highpoint of the show came with comic Nader Modarres (@Nadskis), whose hilariously, irreverent set came in the form of an audience Q&A about his Jewish culture.

The tweeps crawled down The Strip to the next stop at the headquarters of Citysearch LA. Reconvening in the lobby of their towering offices, the net based city/entertainment guide offered an assortment of tasty food from the Veggie Grill on and holiday spirits in the form of crisp, clean PBR (@PBR_LA). Joined by rockaholic reps from 98.7 FM, the crawlers were also treated to a wide assortment of prizes, providing of course that they could answer a number of holiday trivia questions.

The next stop on this interactive field trip was the notorious Viper Room, representing Hanukah for all those of the “Xmas” persuasion. Amidst the festival of lights, the bar offered a special discount menu of holiday beverages, including a blue concoction called “the Hanukah Cocktail”.

After a short pit stop at The Hustler Store to collect a goodie bag filled with their brand of holiday toys, the crawlers wrapped their Sunset Strip expedition at On The Rox above The Roxy Theatre. There, the tired and “over-spirited” socializers, wound down their evening by butchering — I mean performing — karaoke versions of their favorite holiday tunes and building gingerbread versions of their favorite Sunset Strip landmarks. You can only imagine the kind of mayhem that ensues with multiple cans of aerosol frosting amidst a band of crawlers.

In what’s likely to become a holiday tradition, The Sunset Strip’s Tweet Crawl III was a raging success. And in this new techno-era, success may be judged by the amount of hits, posts, tweets, and retweets littering the various social networking sites on the net, but it is reinforced by the number of happy faces exiting On The Rox on a brisk, Los Angeles winter night.

(Thanks to Andrew Herrold for the photos.)