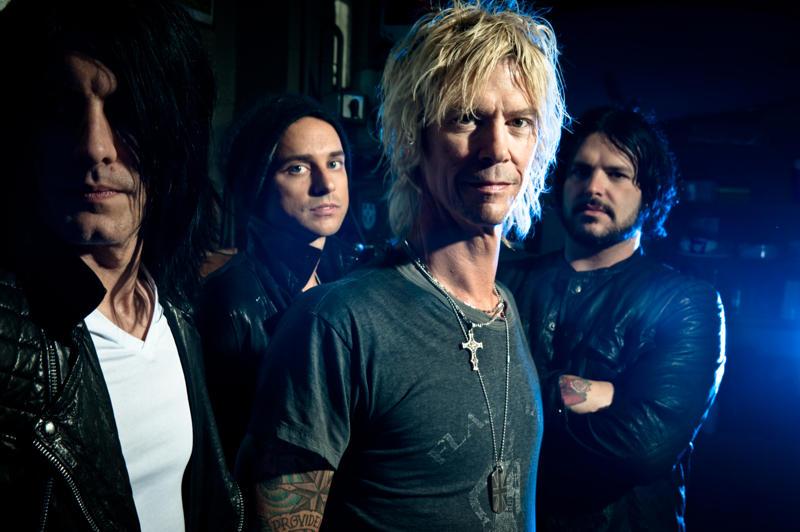 Tonight, one of rock’s most prized players, Duff McKagan, will take the stage with his band Loaded at the Viper Room. Celebrating the release of their new record The Taking, the band is also set to perform later this week at the third annual Revolver Golden Gods Award show, all this before embarking on yet another European tour.

Driving home from a Deftones show in Seattle, McKagan was kind enough to phone in to TheSunsetStrip.com to discuss his current project, his storied career in rock, reality TV and the one musician who made him tongue tied.

So The Taking, Loaded’s third record, is set to be released this week; what can we expect? How does this album differ from the previous two?

Well, Loaded is a band that definitely doesn’t stay static musically… We were all kind of laughing the other day that it’s the longest band that any of us, including me, have ever been in. Ten years, same lineup basically.

While touring extensively on the last record, we just started writing these riffs, these darker, harder thought riffs… I live in a house with three women: my wife and my two daughters. And I love them, and they are my life… but it’s pink and fluffy and shit around my house all the time, and I need this to exorcise the shit out of me… I don’t drink, I don’t do drugs and so songwriting has become that place where I can get out all that dark shit.

We came right off the road, and that caffeine was still there, that testosterone, adrenaline, all that…and we went in and recorded the demos for the whole record that is The Taking. So it’s really pretty aggressive, and I’m proud of the lyrics.

We’re doing the record with Terry Date (Deftones, Soundgarden, Pantera).  I’ve never done a record with him before, and he’s really great.

The new record is set to be released on Tuesday, April 19, when you’ll be playing the Viper Room on The Strip. I know Loaded has played there a number of times before; any special significance and/or memories of that room from back in the day?

Well my old band Neurotic Outsiders [supergroup that formed in 1995 and featured Steve Jones of Sex Pistols, Matt Sorum of GNR and John Taylor of Duran Duran], we played there every Monday for months! I’ve played there a ton of times…

Funny enough, I used to go there back when it was The Central, and I think Guns was already pretty fuckin’ huge at the time… I was a mess; I was sort of out of my mind, and I think I ended up there a time or two doing some bad shit… But then that’s also where I played my first sober gig ever. So really, I kind of hold that place in high esteem.

I didn’t think I was ever going to be able to play music again sober. I didn’t know that you could play shows without being fucked up… So I love that room, and I’m proud to be playing there as a record release venue.

VH1’s “Married to Rock,” are we going to see a second season?  How has that been having cameras in your personal life?

Well the things I did with Susan [wife Susan Holmes] were great and she came off great, and she had a great time doing it. I don’t know if there’s going to be a second season. They haven’t told us anything yet.

As far as cameras in my personal life, I think I probably put more stress on myself. Just making sure the contracts were structured correctly… You know limiting what they could and couldn’t use, and you know, I just didn’t want to look like a buffoon. I didn’t want to be that guy walking down the street and be known as “that reality show guy.”

I’m a musician first and foremost, and forever, and I don’t want to be known later on in my career as a reality show TV guy. So I think I just put stress on myself… It was innocent, if anything a younger audience who may not have recognized me does now.  We kept it controlled; we didn’t show our kids.

You have a degree in finance. What are your thoughts on the state of the music industry and the market for music?

You have to learn to budget… How much is gas? You can’t just jet across from Seattle to Salt Lake City, and then back up to Portland. The old tours, you would just kind of take whatever was available and not worry too much about gas and expenses. But now you just have to tour tighter and know what you’re doing… and cut deals for your T-shirts, that’s where you’re making your money and keeping the band afloat.

This is our job. This is what we do to pay our mortgage, our rent, keep the refrigerator full, support our kids, all that stuff. The general public doesn’t really think of that, and I can’t expect them to…and there’s nothing I can say to you that can change someone’s thought process on that. That’s just the way it is.

Bands are licensing out music to whatever now, and I think the audience understands that. We have to do sponsorships…to tour. Fifteen years ago, if there was a partnership with Toyota or something, people would’ve cried “fucking sellouts,” or whatever, but nowadays the audience doesn’t say that. You just got to be smart. You have to be on top of your game. You have to be running a business.

Yeah, don’t know if I really want to get into that… but I’ll tell you this, Velvet is supposed to happen. It will happen when it’s supposed to happen. You know Slash is out touring right now doing his thing, so maybe we’ll reconvene next September and see what we want to do.

I mean it was a great band, and Slash and I, we have that chemistry thing… and it’s just this powerful thing that you don’t get all the time.

…These days you look at a guy like Lemmy who’s 20 years older than me, and Iggy who’s whatever age he is, and The Stones and Aerosmith, and I kind of just think, “Well, I’m only like halfway through my career.” I mean these are the guys who are still out doing it…and hopefully I have a long bit of career left to go.

You’ve played with everyone who’s anyone. You’ve toured the mega-arenas around the world. What’s left to do?  Do you have any personal musical goals left that you feel you need to accomplish?

I’d love to play with Prince. I played on the Iggy Pop record, and he’s my guy… I played with Steve Jones; he’s my guitar hero.

Prince is the guy, probably the biggest musical influence all around for me, and I got to meet him one time, but I was so fucking tongue tied that I didn’t know what to say… But to be able to play on a song or something like that; that would be pretty bad ass, just on a personal level.

You know there’s a hundred things I could think of I have left to do, but it’s been great so far. I’ve never really sat there and thought about it; about what I’ve done so far, and how does it feel. I probably should do that one day, but it’s not happening yet. Probably a good sign.

So last year we had Slash as our honoree for the Sunset Strip Music Festival, and we’ve also had your old bandmate Matt Sorum playing with his Darling Stilettos project (in 2008). When are we going to get Duff McKagan on the bill for SSMF?

Make me an offer! Nobody ever called me. I think when you’re a bass player, you kind of get the shaft/ I mean even drummers are further down the line… Tell them to give me a call! It sounds like a fun thing.