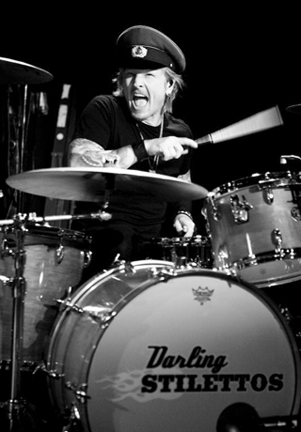 Having shared the stage with some of the biggest bands in the world, Matt Sorum (Guns N’ Roses, Velvet Revolver) has tasted success on a grand scale more than just once. His latest project as captain of rock and roll girl group the Darling Stilettos has him on the brink of mainstream stardom once again.

How does this in demand drummer balance his hectic schedule? Get the low down from the man himself before heading to the Viper Room on Friday, Nov. 12 for the final night of the Stilettos’ impressive residency.

How many different musical projects are you currently juggling?

“Well I have an album I’m doing with Cherie Currie (The Runaways), Velvet Revolver is getting back to work, I do Camp Freddy from time to time, and Darling Stilettos is a full time thing, getting it perfect.

We have a Vegas show called Rock N Roll A Go-Go, which is what you see at the Viper Room. The big vision is an over-the-top rock and roll experience in Vegas, and the original group, Darling Stilettos, is part of that.”

Speaking of Darling Stilettos, what was the inspiration for forming a female-fronted singing group?

“Well I have always thought rock and roll has been a male dominated sport, with the exception of the great female performers like The Runaways, Joan Jett, Cherie Currie, Chrissie Hynde, Courtney Love, there have only been a few. Taking that idea [and] adding beautiful girls that dance and bring an entertaining twist to a style of music that hasn’t been done before.”

Guys or dolls: who are easier to get along with in a group dynamic?

“These girls are pros! We’ve gone through a few girls, getting the right ones. But I am so happy with them. It’s that way with bands too… Coming up in the early days, there was always one guy in the band that was a bummer. And being in a group is like a relationship; there are things you have to except about certain individuals. But I have to say the girls have been the best ever.”

Any chance you’ll ever get out from behind the drum kit and show off some of your own dance moves?

“You won’t see me doing that anytime soon. I do private, theme dancing for my girlfriend only! I like to dance to the credits of movies. They always have different music, from jazz and modern, to classical. I have a mean pirouette!”

What’s the future for the Stilettos? Recording a full-length album? Touring?

“All of that…this is a vision, and much more than just a band. It’s a lifestyle of an art form that is constantly being pushed aside for pop, rap and other genres of music. We have seven original tunes and are writing more as we speak. Also, touring of course.”

“A lot of people don’t mix business with pleasure. But this partnership has not only brought us closer together, we [also] have a common goal. I have tasted success a few times, so it’s cool that I can help Ace avoid the pitfalls of a very tough business. She has grown immensely through this process.”

I see that Camp Freddy will be returning to The Roxy Theatre for a three-week run in December? What can we expect this time around? Any lineup changes? Special guests you want to announce?

“It’s always a surprise for Camp Freddy, even for us! Sometimes guests are confirmed last minute, but guaranteed fun for sure!”

Favorite drummer of all time?

You can hear a little bit of all those guys in what I put together as my style.”

You’ve played with just about everyone. Who have you not played with that you’re dying to work with?

Camp Freddy has helped with those dreams and we always reach very high. But I think [David] Bowie is a big one for me. A true artist.”

Do you remember your first show on The Sunset Strip? How has The Strip changed?

“Yes, I do. 1974 Gazzarri’s Crazy Horse West, where the Key Club is now. There were four stages then, and the ’70s was the coolest time for rock and roll, in my opinion. Rock stars were on a whole other level then. I was 14 when I played there and had to sneak in the back door. I remember seeing Roger Taylor from Queen at the Rainbow in a Rolls Royce, which made a kid dream, believe me! I wanted to be him. I still want a Rolls and plan on buying an old one soon. The rest of my rock and roll dreams have come true. It has been everything I dreamed of and more!”

You can catch Sorum with the Darling Stillettos at the Viper Room Friday, Nov. 12, and with Camp Freddy Dec. 3, 10 and 17 at The Roxy Theatre. For more information, check out MattSorum.tv  and DarlingStilettos.com.