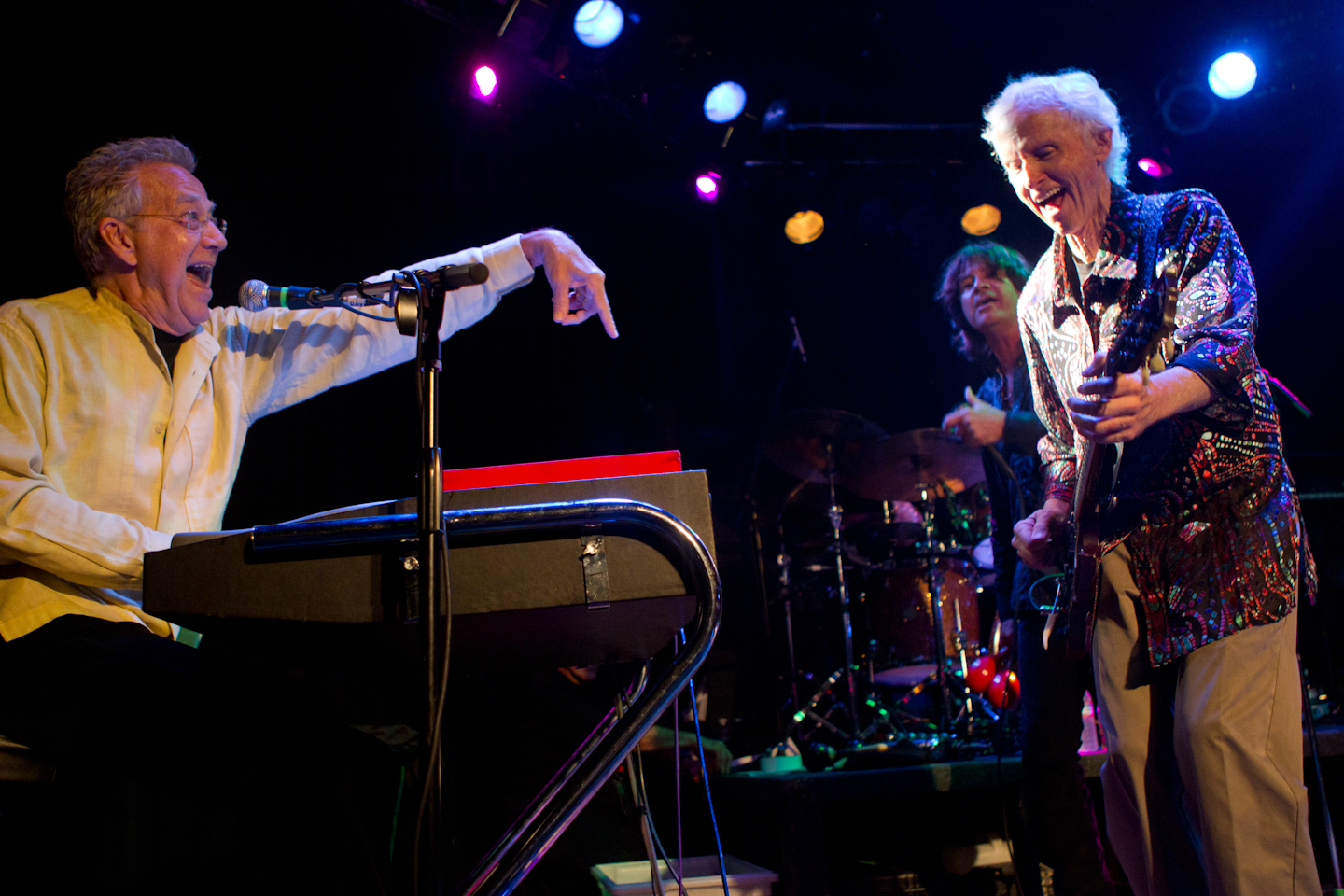 One of the most influential and pivotal keyboard players in rock music, Ray Manzarek has continuously performed in one incarnation or another since co-founding The Doors in 1965.

On his new collaborative effort with guitarist/producer Roy Rogers, Manzarek continues doing what he does best: pounding out bluesy, jazz-inspired key riffs, accompanied by the words of America’s great modern day existential poets. Manzarek shared the stories behind this new collection of songs, reminisced about his early days with Jim Morrison and The Doors on The Sunset Strip and explained the term “chicken wing.”

So you’re currently touring as The Manzarek-Rogers Band. Would you like to tell us a bit about your new album Translucent Blues and working with Roy Rogers?

Well we first got together about four or five years ago through our mutual agent [Steven Gordan]…and he said… “Why don’t you guys get together? You’re both blues men, and you’re both men of a certain age. Try playing together. I mean, Roy is so versatile. You’ve got a gig coming up in Northern California, why don’t you let Roy sit in for about five numbers or so?”  And I did, and he was terrific. We played a little blues…and it worked out great! So we just started working together, and it blossomed into Translucent Blues.

So this is obviously a blues album; we’re blues men after all. This is an album with lyrics by poets… Consequently, we altered the basic 1/4/5 structure of the blues and followed the dictates of the lyrics, which forced us to go into different directions…

The poems are written by such wonderful writers as  Michael McClure, an old buddy of mine who I’ve been working with for the last 15-20 years.  We have two stanzas from Warren Zevon…and then there was also Jim Carroll, who wrote The Basketball Diaries, another great American poet; Scott Richardson, a psychedelic poet out of Detroit, who came out to L.A. a long time ago; and Michael C. Ford, an old L.A. jazz buddy of mine, a jazz poet, and some stuff that Roy and I put together.

Yes, the name of the last track is, “Organ, A Guitar And A Chicken Wing.”  It’s a tribute to Jimmy Smith and all the organ groups with a saxophone.

And chicken wing refers to…

Chicken wing refers to the saxophone.

Really?  I’m not familiar with that term.

Neither is anyone else. I made it up! You know how the tenor saxophone is mainly shaped like a chicken wing?… Look at a chicken wing at some point. It’s got three parts to it, and so does the saxophone – a mouthpiece, the fingerboard and the bell of the horn coming up. So it’s analogous to a chicken wing.

With all the musicians and artists you’ve collaborated with over the years, is there anyone that you haven’t worked with, that you would like to?

Oh, Jesus! Yeah, about a thousand! Doors manager Danny Sugerman knew Gábor Szabó, a jazz guitarist who played with Chico Hamilton and Charles Lloyd back in the early- to mid-’60s.

He was a guy that I really wanted to play with, but he unfortunately died…

But you know, I could play with anybody, anywhere, anytime. I mean, God, all those great guitarists – I’d like to play with [Eric] Clapton, that would be fun! Would loved to have played with Jimi Hendrix, but I think keyboards would have been superfluous. It would have been odd for Jimi Hendrix to have collaborated with a keyboard player, with all that guitar occupying so much of the sonic spectrum. There would be no place to stick keys in there. So that would have never actually worked out…

You’ve always remained sort of a traditionalist with your sound – keyboard wise – and have never gotten too overly steeped with technology, sampling and what not. Is that a conscious effort on your part?

I’m not allowed to do any of that! Because whenever I play with somebody, it’s, “Give us that Ray Manzarek organ sound!”

I just did something on Sly Stone’s new album, and I asked him, “What do you want?” And he said, “Give us that vox organ sound, your classic Ray Manzarek style!” And that’s what people want from me. People just love that sound.

Do you find it challenging to keep that fresh? Do you ever feel like you’re sort of doing a parody of yourself?

You and Robby Krieger played the Sunset Strip Music Festival in August with Dave Brock (lead singer of The Door’s tribute band Wild Child). I know a number of different vocalists have taken over lead throughout the years. Is there anyone in particular that you’ve felt has really captured the spirit of The Doors more than the others?

No, no, no. Your first question should be… “Ray, why have you had so many different lead singers?” Because we burn them up! Doors’ lead singer is a dangerous occupation! They tear their throats up, and occasionally, totally expire…

I imagine fan critiques are pretty harsh as well..?

Oh, yeah! It’s rough on those guys. “Oh my God, how dare you!” Well would you like to see me and Robby play Doors songs? Would you like someone to sing? Get somebody famous? “Oh, get Bowie!” Really? You want to see David Bowie singing Doors songs?

David Bowie’s not going to sing Doors songs! He’s got his own songs. Anyways, it’s tough on the lead singers. “Well, you’re no Jim Morrison!”  Well who the fuck is? …

They moan and groan… Then they come to the show and say, “Wow that’s one of the greatest shows I’ve ever seen!” So I appreciate that, no matter who we’ve had singing, whether it’s Ian Astbury [The Cult], Dave Brock or Brett Scallions [Fuel]. So that’s what we live with.

So what’s that like being on stage at the Whisky A Go-Go almost 45 years later after getting your start as the house band? What memories come to mind?

Well, that [Sunset Strip Music Festival] show was great! It was just like being in 1967, 1966. There we were playing “Light My Fire” on stage at the Whisky A Go-Go. The place was packed, people were dancing and we’re playing Doors songs.

You close your eyes and you synch into the music and it’s just rocking! I just kind of float over it, like playing with my disembodied left hand [The Doors drummer] John Densmore, my right hand Robby Krieger… We float over the top…and Morrison floats over the top of that, and so does the lead singer today.

Dave Brock does a great job.  He’s been singing Doors songs for 20 years now. It was great, appropriately throbbing and sweaty, and hypnotizing.

The late Phil Tanzini [proprietor of the Whisky] firing us and sayin, “Don’t ever come back unless you pay to get in! You’re fired!”

It’s funny. It was a Thursday night when he fired us, and Robby [Krieger] very wisely said, “Phil, today is Thursday. Do you want us to play the weekend or not?” And Phil said, “Oh yeah, well you play the weekend, but Saturday night you’re fired!” And we were. That was it, and we never played the Whisky A Go-Go again as The Doors with Jim Morrison.

With any legendary band, like The Doors, The Beatles, Zeppelin,  people always have a thirst for new information, new stories, and with all the books, movies, interview, etc., is there anything left to be said?

No.  No [laughter]… Just variations on stories. It’s been reduced to, “Tell the beach story Ray…” Well you know the story. “Yeah, but we just love to hear you tell it!”

So alright, let me set the mood for you, here’s how it went… It was summer of 1965, middle of July. Venice. Hot summer, etc, etc…  Then I go on to telling the story of Jim Morrison walking down the beach and kicking up water, and the backlighting turning them into diamonds at my feet. So diamonds were coming off of Jim Morrison’s feet…

It was marvelous man, the sun was setting, Dorothy’s [Manzarek’s wife] working. I have no job. He [Morrison] has no job. We were supported for the first six months of The Doors by Dorothy Fujikawa taking care of us and feeding us. My girl supports us two vagabonds and the three of us lived together. We had nothing, I mean nothing, except a little one bedroom place just off the beach, where we could watch the sun setting into the Pacific Ocean.

We’d drive Dorothy to work in the morning and then Jim and I would drive over to the UCLA music school and go down into the rehearsal rooms and we would work on, you know, “Break On Through,” “Summer’s Almost Gone.” We’d work on “My Eyes Have Seen You.” And Jim was just learning how to sing, and I was getting the hang of how he would phrase things as an un-schooled singer, but he had a great ear! He had a great musical sensibility. What was even better was he didn’t play even six chords on a guitar…

Jim Morrison was the word man. He was the poet. He would have a melody in his mind and we would play through that melody and then make chord changes around the melody and find out what key he was in… It was just a marvelous collaboration.

How do you want to be remembered?

I want to be remembered by my family as a husband, father and grandfather. A brother. But it doesn’t matter…

I think the last thing in the world that you are going to be concerned about when you’re gone is what people think of you here [laughter]. When you die, you go into infinity. You could care less about this quick snap shot in time, this little moment in infinity…

You’ve moved on to a new existence, and that existence is called infinite. You become one with the energy itself. That energy is called God. We become one with God. You are God…  You could care less about what “they” think about a human entity called Ray Manzarek that existed between 1939 and, let’s say, 2030… Who cares!

Just a grain of sand on the beach. Just a drop of rain in a thunderstorm. That’s all you’ll be. It won’t matter at all… The joy, the good times that you are having here and now… That’s what it is all about!

I don’t want to be “remembered.” I want to live this life and have a great time occupying this fleshy form.

Photos: Ray Manzarek and Robby Krieger perform with David Brock at the Whisky A Go-Go during the Sunset Strip Music Festival on Aug. 19, 2011. Photo courtesy of Nate Christenson/SSMF.