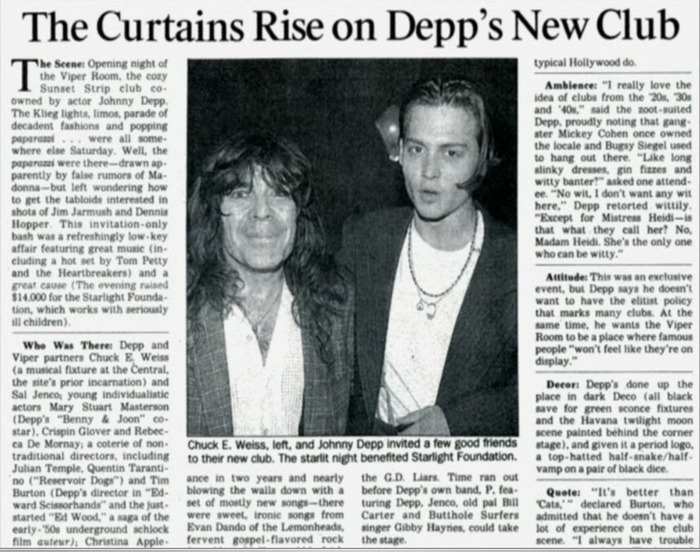 Opening its doors on August 14, 1993 with a performance by Tom Petty and the Heartbreakers, the intensely intimate, 200 capacity Viper Room has hosted thousands of legendary, “arena-sized” shows in its storied 21 year history.  To name a few: Johnny Cash, Bruce Springsteen, Pearl Jam, Oasis, Hunter S. Thompson, Green Day, Muse, Kings of Leon, Queens of the Stone Age, The Strokes, Smashing Pumpkins, the list goes on…

Offering music fans the chance to see mega-bands like these in a tiny club setting is what The Viper Room has become known for not only in industry circles but worldwide.  And for countless musicians, The Viper stage – given this legacy – holds a sort of reverent ethereal magic not found in any other room.

Reflecting back on some of their favorite memories from Viper night’s past, TSS.com spoke with a few of the club’s favorite regulars to gather their most rock n’ roll moments – both on stage and off –  spent at the notorious 8852 Sunset Strip.

Jimmy Gnecco (Ours): “The club has always been a magical place for a few reasons.  For one, the sound does something to me in that room – from the first time I stepped into the room I noticed the sound having an actual physical effect on me.

Back in 2003, I had played there two nights in a row.  I played on my own acoustically, the first night I played with James Hall and Pleasure Club, and the second night was with Johnny Marr (The Smiths) and Zak Starkey (son of Ringo Starr).  On the second night when my set was over, I jumped off stage and had a few drinks with some people.  Johnny and Zak started their set, and for the first couple of songs it felt like something was just off.  I felt like, ‘Oh man, they aren’t sounding very good…’

Then at one point something happened and everything locked in, and the sound started to do that thing to me that I was talking about.  I thought, ‘Oh maybe my alcohol just kicked in or something.’  When the song was over Johnny said, ‘Oh I’m feeling it now.  I wasn’t feeling it at first, but now I am!’

It sounds a bit hippy-ish and mystical, but there really was a moment when we all felt it come together.  That’s the kind of thing that happens there.  I actually ended up writing an entire song in my head that night while that happened.  The song is called “Ran Away to Tell the World.”  So thank you Viper Room for all of the memories and inspiration.”

James Hall (Pleasure Club): “In 1994, I had my first Viper Room experience.  My band was out on our first West Coast tour since 1989, and we had already played the Whiskey A Go-Go and Club Lingerie… We had just gotten our van back from the Hollywood Western Auto, and we were ready to leave L.A. for Northern California and the Pacific Northwest, when at the 11th hour, we had somehow gotten a show at The Viper Room… And from the moment we pulled up, until the moment we pulled away, we were amazed.  Everyone on staff was professional and respectful, even though we were nobody!  I don’t even really remember the show, other than that it was a full house and there were only three bands on the bill!

As we were packing up, I managed to sell our independent record to Dean DeLeo (Stone Temple Pilots), while Scott Weiland and Nash Kato (Urge Overkill) were arguing over who was going to open up for whom; and I remember thinking to myself, ‘Now this is a strange scene.’

From that point on, The Viper Room has been a sort of home to many shows I have done in L.A. over the years…”

Kellii Scott (Failure/Viper bartender 2002-2003): “All my memories from The Viper are favorites.  From when it opened to currently, I have witnessed 100s of great shows – some just funny, and some incredible performances.  One that sticks out was a [political] fundraiser which Elvis Costello played, and it was such an amazing performance and packed with weirdoes.”

Michael Starr (Steel Panther): “The Viper Room has so many great memories for me – from playing with Steven Tyler, Meatloaf, Corey Taylor (Slipknot), Paul Stanley, Avril Lavigne and many more, The Viper Room holds a special place in my heart.

One night that stands out for me – we played our show and afterwards had our normal after hours party inside the club…  Only a few selected hot chicks, dudes with drugs and celebrities were allowed to stay.  I met this super hot young chick that got in with her fake ID.  I took her in the dressing room – which had a one-way mirror – and I started getting it on with her!  I had her up against the mirror, and while we were sweating to the 80’s, I was looking out and saw Brad Pitt and Keanu Reeves having a beer, Pamela Anderson was there with Tommy Lee, Steve-O was jumping around, and Duff (McKagan) and Matt (Sorum) from GNR were just hanging; Kiefer Sutherland was on stage jamming.  Turns out the girl was Jesse James the famous porn star.  However she was not a star at that point, she had just gotten into town from Florida.  She was a pro at 18 that’s for sure!

Having sex at The Viper Room with famous people hanging out was normal.  That’s what made that place so special to me – good drugs, hot chicks and movie roles just waiting to be had.

Thanks Johnny Depp for The Viper room, it’s changed my life for the better!

Steve Stevens (Billy Idol guitarist): “If you believe that spirits inhabit locations as I do, my Viper Room story has a disclaimer – the name may have changed, but the rock remains the same.  You see before 8852 Sunset Blvd. was The Viper Room, it was a club called The Central…

The entire Billy Idol band came out to Los Angeles to record Billy’s debut album in 1982.  We came armed with a batch of songs that we recorded, but still didn’t have the one. When you record an album, you are lucky if you have that ever-elusive track that you know will go to radio first and will be your lead-off single – the one that leads the cavalry.

Our producer Keith Forsey basically locked Billy into the studio all night and said, ‘Don’t come out until you’ve got some magic.’  Well the next morning, I got a knock on my hotel door and Billy stumbles in with his boom box, cassette in hand.  ‘I think I have one Steve!’  He proceeds to play me his demo of “White Wedding…”  Hell yeah, did he have one!  As we knew this was an important track, we lamented that we wished we could play the song live to see if there were any aspects that could only reveal themselves in front of an audience.

Well calls were made, and it was decided that we would get up onstage that night at The Central unannounced – it was jam night, how convenient.  We played a couple of Generation X songs – Billy’s previous band – and then with little introduction we launched into “White Wedding.”  It felt fresh, and very different for me as a musician… like my sixth sense went off and delivered the chill.  Now whenever I’m at The Viper Room, I’m immediately reminded of that night in 1982, and I still get that chill.”

Justin Trantor (Semi Precious Weapons): “I think 8 of the 10 most scandalous rock n’ roll moments of our career happened at The Viper Room.  Spray painting dicks in the dressing room and cracking our skulls open on stage just to name a few.  Beyond honored to be a part of the history of such a legendary club.”

Scott Weiland: “I love The Viper Room it’s a home away from home of sorts, the last bastion of what’s left of a Hollywood neighborhood bar.  It feels and smells like CBGBs West Coast; a safe-house for MCs, rockers and poets alike.  There’s real loyalty there, the kind you don’t find anymore in the city of angels; and I stole my bass player (Tommy Black) from there…”