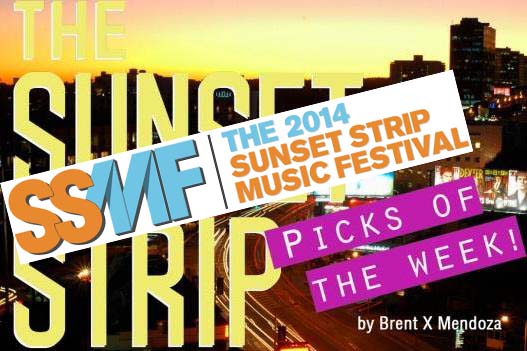 SSMF Much More Monday at Pink Taco
Kick-off SSMF Week and enjoy a night of rock and roll curated by DJ Margot Lox highlighting past and present bands who have performed at SSMF over the years. Regular happy hour food and drink specials from 4-7 p.m. and a special extended happy hour from 7 p.m. to close. As a special bonus, SSMF ticket holders will receive 15% off their bill (regular priced items only). To redeem, just show your ticket. www.pinktaco.com

Sunset Strip Karaoke at Rock & Reilly’s
Rock N’ Reilly’s, located adjacent to the Whisky A-Go-Go, at the former location of the London Fog, the club where Sunset Strip icon Jim Morrison first took the stage, hosts their rock n’ roll karaoke. You never know who is going to drop in on this special SSMF karaoke night. 9:30 p.m. – close.  www.rnrpub.com

Movie Nights at The Den: “Almost Famous”
The Den will host a screening of Cameron Crowe’s film “Almost Famous,” starring Kate Hudson and Billy Crudup. Portions of the movie were filmed on The Sunset Strip and the Andaz West Hollywood. Screening begins at 9 p.m. with popcorn and drink specials and is free to attend. www.thedenonsunset.com

Pre-SSMF Show at Viper Room
Dirty Little Secrets Burlesque takes the stage. Black Star Electra, After Arrows and Eyes Of One round out the lineup. Ages 21 and older. Doors open at 8:00 p.m. and tickets are $10. www.viperroom.com

Taco ‘Bout the SSMF at Rock & Reilly’s
Gourmet tacos that will blow your mind. 5-11 p.m. www.rnrpub.com

World’s Greatest Tribute Bands Rock the Whisky A Go-Go. Pour Some Sugar on The Sunset Strip! PYROMANIA a tribute to Def Leppard will be at Whisky A Go-Go as part of The World’s Greatest Tribute Bands. The TV show is broadcast 100% live, nationwide from The Sunset Strip and you can be part of the TV audience for FREE! Grab your tickets and Let’s Get, Let’s Get, Let’s Get ROCKED! Don’t forget to set your DVR for AXS TV so you can re-watch the TV magic! www.whiskyagogo.com

Poolside Film Screening & Live Music at The Standard
The Standard will host a screening of “Legends Of The Canyon” and live music performance by folk artist Priscilla Ahn on the pool deck. The event is free to attend and begins at 7 p.m. standardhotels.com/hollywood

SSMF Rock N’ Roll Karaoke at The Den
Channel your inner rock star at The Den’s Wednesday night karaoke and you could win tickets to this year’s SSMF! Show up and perform a song from SSMF featured artists.  Top performers will be awarded tickets.  Winners will be recorded at the end of the night and featured on the Den’s Facebook page.  Rock N’ Roll karaoke begins at 9 p.m. www.thedenonsunset.com

“For The Thrill Of It” Lobster Night at Pearl’s Liquor Bar
Celebrating Sunday’s headliner Empire Of The Sun, Pearl’s on Sunset is offering $25 two pound Maine lobster with Kennebec fries and seasoned fresh corn. “Never looking down, just in awe of what’s in front of me.”  Starts at 5 p.m. www.facebook.com/pearlsliquorbar

A Night Of Live Music at The Den
The Den hosts a full night of music with performances by Michael Rockstar, Dirty Lingo and Boxhoused. The music begins at 9 p.m. until midnight. www.thedenonsunset.com

Jay Davis ROCKOMEDY Show at The World Famous Comedy Store
it’s not just comedy, its comedy that rocks. JAY DAVIS (HBO, Comedy Central’s Tosh.0) hosts some of the strip’s best known comics. JASON ROUSE (Showtime with Russell Peters) and PAULA BEL (Jenny McCarthy’s Dirty Sexy Funny, HBO, Tonight Show) will be joined by some VERY SPECIAL GUESTS. This event is not to be missed. Doors open at 9 p.m. Ages 21 and older, only. Get your tickets in advance http://hollywood.thecomedystore.com/

SSMF at Sunset Strip Market
Enjoy live music from Ron Dziubla and Rumproller Organ Trio, a craft beer and wine garden, cocktails and artisan food outdoors. Everyone’s favorite Legendary Bingo will be back with prizes including SSMF tickets, Keurig machines and Hustler Bags. We Talk Chalk will unveil their “Whisky” 3D art installation and displaying past installations of The Roxy and Viper Room. And kids can party rock n’ roll style and meet the Disney Junior star of Choo Choo Soul and the host of Radio Disney after the show. Free to attend and all ages. 5:30-9:30 p.m. www.sunsetstripmarket.com

Sunset Soiree DJ Sets at Pearl’s Liquor Bar
The Strip will be in rocking and dancing from end-to-end.  You can get your fix of the electric dance side of SSMF on Pearl’s rooftop patio.  Get in the groove and enjoy DJ sets spinning music from artists performing at SSMF. 9 p.m. til close. www.facebook.com/pearlsliquorbar

Live Music at Carneys
Enjoy live music outdoors at Carneys from 7 – 11 p.m. This event is free to attend and open to the public. www.carneys.com

H.R. of Bad Brains rocks the Whisky A Go-Go

Bad Brain’s H.R. headlines a bill for music fans that are serious about their rock.  20lb Sledge, Vigilant Playground, Once A Wolf, Grant My Wishes, The Wyldz and Dyson Alexander round out the night.  http://www.whiskyagogo.com

SSMF Kick-Off Pool Party at The Standard hosted by Keurig

The Standard and Keurig will host a VIP Pool Party to kick off SSMF.  Music by Brian Polor (DJ), cash bar and good vibes on the pool deck.  The event is free to attend and begins at 11 a.m. – 1:30 p.m. www.standardhotels.com/hollywood

Live Music at Carneys
Stop by Carneys before you enter the festival and enjoy free live music from 11 a.m. – 3 p.m.  www.carneys.com

NCAA Football “Addiction” at Rock & Reilly’s
Rock & Reilly’s will host NCAA football games for those who want to keep up with the games in between live music sets.  Stop by to catch the action on their 15 HD screens.   www.rnrpub.com

Rooftop “Walking on a Dream” VIP Party at Pearl’s Liquor Bar
VIP access only to Pearl’s rooftop patio, the best view and party in the festival grounds. www.facebook.com/pearlsliquorbar

Empire of the Sunday NFL Football
All the NFL games and rock and roll you can handle, all day.  Enjoy food and action with 15 HD video screens in-between epic SSMF sets.  www.rnrpub.com

Rooftop “Walking on a Dream” VIP Party at Pearl’s Liquor Bar
VIP access only to Pearl’s famous rooftop patio, the best view and party at the festival. www.facebook.com/pearlsliquorbar