Behind The Lens: GuitarTown 2012 Charity Auction 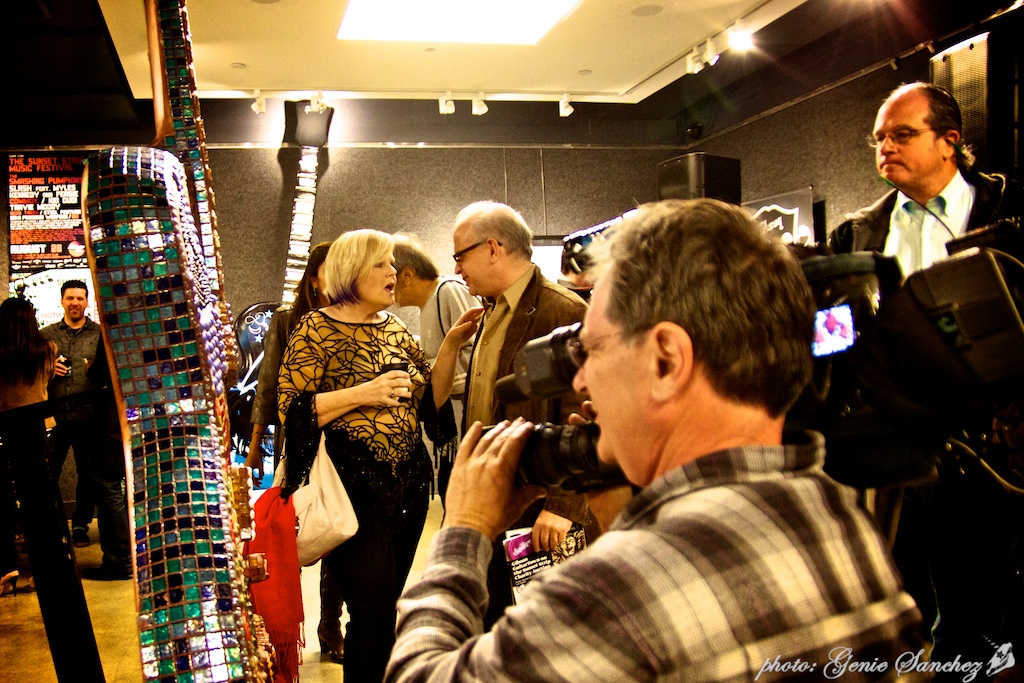 When the two realms of art and music collide, they create the axis of awesome. Once again this year Gibson Guitar and The Sunset Strip stood in the middle of this axis when they teamed up to create Gibson GuitarTown, a public art project.

This collection featured sculptures created by notable artists such as the notorious 1980s graffiti artist RISK, John Kosh, who could arguably be the fifth member of the Fab Four, and the Obey Giant himself, Shepard Fairey. Some local and underground artists involved included “jock turned art kid” Ryan McCann, mosaic master Juliana Martinez and artist extraordinaire, Nic Adams. The auction took place Feb. 22 at Bonhams, a fine art auction house just a hop and a skip from The Strip.

The evening started with hors d'oeuvres and cocktails courtesy rock and roll’s sidekick, Jack Daniel’s. Music lovers, art enthusiasts, collectors and some familiar faces got to view, up close and personal, each piece of the 2012 collection. A few retro photos of The Strip hung on the walls alongside Sunset Strip Music Festival street banners and a selection cars were also on display from Hornburg Land Rover.

Fans of the sculptures posed for photos with their favorite pieces of art depicting a slice of Sunset Strip history before heading into the auction room to bid on the giant guitars to take home as their own. The profits of this year’s auction benefitted the Los Angeles Fund for Public Education’s “Arts Matter” campaign, which is dedicated to revitalizing arts and music education in L.A.’s public schools.

Just like any good rock show, the beginning started off a little quiet just as the audience feels out a new up and comer opening band. Interest peaked as the night went on and the guitars had their time in the spotlight. Energy in the room quickly picked up, members of the audience sat on the edge of their seats to try to see more as tensions grew for individuals to out-bid each other. The auctioneer yelling over the chatter of the crowd, bidder numbers held higher and higher, followed by a victorious smile and a round of applause.

As quickly as it started the auction ended. The tour is over, guitars go home, students learn about music and art, and creative masterminds gear up for the next tour. The winning bids ranged from $300 – $17000. Among the most sought after were the Buffalo Springfield homage signed by band member Steven Stills and artist Juliana Martinez; Shepard Fairey's nod to Marc Bolan of T-Rex; and RISK's tribute to The Doors signed by the artist along with band members John Densmore, Robbie Krieger and Ray Manzarek. Art lives! See you in GuitarTown!