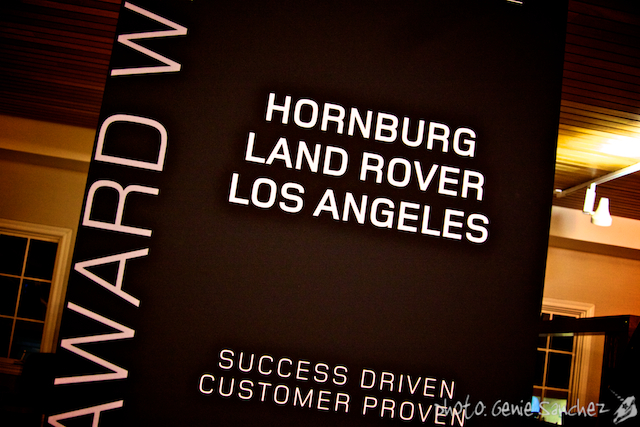 Last night, round two of Gibson GuitarTown was unveiled during an invitation-only event at Hornburg's showroom on The Sunset Strip. The new round of guitars features work by renowned local and national artists, including Shepard Fairey, Tristan Eaton and fellow street artists DeeKay, Free Humanity and Smog City. The guitars celebrate a range of musicians who have influenced The Sunset Strip, including Buffalo Springfield, T-Rex, Jane's Addiction, Rage Against The Machine and Van Halen, among others.

The initial nine 10-foot tall art guitars will be on display along The Sunset Strip starting today through November. After their "tour" of The Strip, the guitars will be auctioned for charity. GuitarTown also plans to unveil an additional 15 guitars later this spring.

The GuitarTown unveiling also featured a check presentation by Slash and his wife Perla Hudson to the Los Angeles Youth Network, which was one of the charities selected to receive proceeds from the December 2011 auction featuring the previous round of guitars.

The full list of guitars included in the initial launch includes:

– Tristan Eaton, “Moms Not Bombs”: This painted guitar celebrates the artist’s mom, Gillian Eaton, an actress in the Royal Shakespeare Company. The guitar also references The Sunset Strip, which was the birthplace for the artist. (“Moms Not Bombs” will be located outside of The Standard, Hollywood.)

– Shepard Fairey, “Electric Warrior”: The painted guitar was inspired by Marc Bolan of T-Rex. Fairey illustrated Bolan as an iconic rock and roll archetype with a nod to vintage vinyl LP and stereo graphics. (“Electric Warrior” will be located outside of the Andaz hotel – formerly the “Riot Hyatt.”)

– Lana Gomez, “Freedom”: The expressionist work celebrates freedom and spontaneity as well as The Sunset Strip’s role in allowing musicians to blaze their own paths. (“Freedom” will be located outside of 9000 Sunset Boulevard.)

– Ryan McCann, “Nothing’s Shocking”: The painted guitar was inspired by Jane’s Addiction’s Nothing’s Shocking album as well as the band’s performance and self-titled album recorded live at The Roxy Theatre on Jan. 26, 1987. (“Nothing’s Shocking” will be located outside of Hornburg Los Angeles – former home of the Cock N’ Bull pub on Sunset.)

– Stephen M. Taylor, “The Music Machine”: The abstract, painted guitar pays homage to Van Halen by utilizing the red, black and white colors of Eddie Van Halen’s iconic guitar. (“The Music Machine” will be located outside of the Whisky A Go-Go.)

Tour the boulevard yourself! Download a free copy of the 2012 GuitarTown map, which includes each guitar's location, photos and brief description.