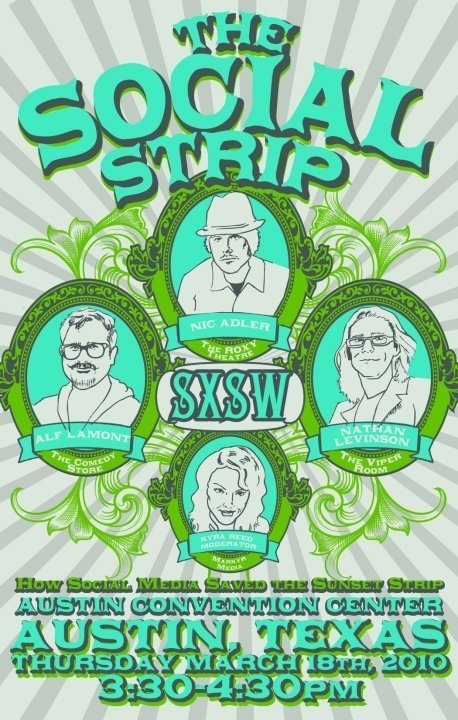 The only thing hotter than the salsa in Austin will be the collection of Sunset Strip venues showcasing talent next week during SXSW. For those headed to the Lone Star State, make sure to mark these events on your calendar.

The Comedy Store hosts a day of hilarity with a showcase on Wednesday, March 17 featuring LA-based all stars Mack Lindsay, David Taylor, Nick Youssef, Justin Martindale and Benji Alflalo. The showcase starts at 1:30 p.m. and is followed by the beyond-words karaoke experience, Karaoke Killed The Cat, at 3 p.m. Both events take place at The Rusty Spurs (405 E. 7th Street). RSVP

Get your talk on Thursday, March 18 as representatives from the Viper Room, The Roxy Theatre and The Comedy Store (otherwise known as @theVIPERroom, @TheRoxy and @TheComedyStore) discuss how social networking sites like Twitter and Facebook have helped the businesses create a relevant and thriving community on The Sunset Strip. “The Social Strip” panel begins at 3:30 p.m. at the Austin Convention Center. Want more info?

After the panel, head back to The Rusty Spurs as The Roxy  presents its third annual AustinRox music showcase. Pop rockers the Crash Kings kick things off at 8 p.m., and you’ll be partying till the break of dawn as Carney, Orgone, Saint Motel, She Wants Revenge and The Glitch Mob take the stage and take over Austin. RSVP