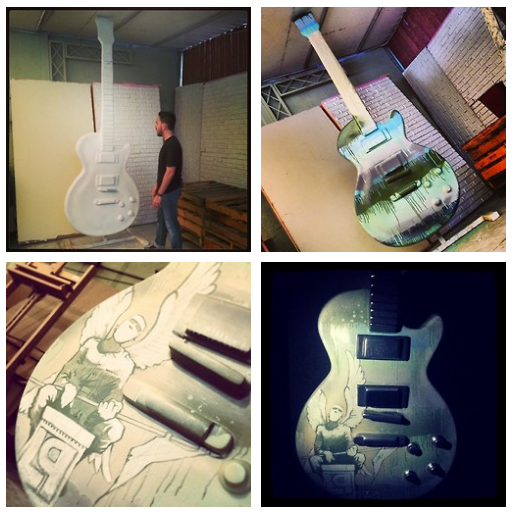 A new round of giant art guitars are coming to The Sunset Strip! The 2013 installment of Gibson GuitarTown on The Sunset Strip will feature works celebrating 2013 Sunset Strip Music Festival (SSMF) honoree Joan Jett, Janis Joplin, Love, ZZ Top, Alice Cooper and Debbie Harry, among others. The guitars will be unveiled at a private ceremony on July 17 and will be on display at the Saturday, August 3 SSMF street festival before being placed along the boulevard for public display.
A range of artists participated in the 2013 installment, including Linkin Park’s Mike Shinoda, tattoo artist Kat Von D, tattoo artist Lyle Tuttle, who was close friends with Janis Joplin, sculptor Eugene Daub, who recently created the Rosa Parks sculpture for the U.S. capitol, and jewelry designer Kathy Rose.
As in previous years, the 2013 Gibson GuitarTown art guitars will be auctioned for charity at the end of their “tour.” Proceeds from the auction will benefit Music For Relief, the nonprofit organization Linkin Park founded to support disaster relief, provide aid to survivors of natural disasters and support the prevention of such disasters via environmental programs.
Collectively, the previous auctions have raised more than $106,600 for charities, including the Los Angeles Fund for Education’s “Arts Matter” campaign, which funds art and music education programs in Los Angeles public schools; the Los Angeles Youth Network, which provides services for homeless youth; West Hollywood Library and funds to support public art in West Hollywood.
The full list of guitars being unveiled at the July 17 launch includes:

Graphic designer Danny Curnen was recently named one of the ‘Top 10 Poster Artists of 2012’ by Creative Bloq (UK). His design for Lisa Marie Presley will soon find a permanent home on display at Elvis Presley’s Graceland in Memphis, TN. His artwork has been featured at legendary festivals such as South By Southwest, the Sunset Strip Music Festival and the Los Angeles Vegan Beer Festival, and he is the official poster art and graphic designer for The Roxy.

Mixed media guitar inspired by the music and influence of Debbie Harry, lead singer of Blondie. (Performed at the Whisky.)

Eugene Daub is the recipient of the highest National Awards for sculpture and relief sculpture. He is the president of the American Medallic Sculpture Association, and a fellow and board member of the National Sculpture Society. Over the last 30 years Daub has designed and created many public art commissions for the United States government, private foundations, universities and corporations and has exhibited in the British Museum and the Smithsonian Institute, among other locations. His sculpture of Rosa Parks was unveiled by President Obama on March 27, 2013, in the U.S Capitol, Statuary Hall. The concept and pedestal were a collaboration with Rob Firmin.

Simone Gad is a self-taught visual artist who has exhibited in local, national and international museums and galleries for more than 44 years. Gad is a six-time grant recipient and Getty-sponsored PST artist who was featured in Lyn Kienholtz's encyclopedia, “L.A. Rising; So Cal Artists Before 1980,” among other numerous publications. Her guitar is part of a continuing series of paintings that focus on Los Angeles architectural monuments and famous females.

Tsipi Mani is a multi-media painter and sculptor with skills working in oils, clay, acrylic, bronze, aluminum and steel. Her paintings and statues fill her home and can be seen in a Beverly Hills gallery, as well as in a few commercial buildings in West Hollywood.

Juliana Martinez created her first mosaic at age 9 and was hooked. She currently creates public art pieces and accepts private commissions. This is her third contribution to the GuitarTown on The Sunset Strip art project. In 2010 she created a mosaic guitar celebrating the "Summer of Love” and in 2012 she created “There’s Something Happening Here” celebrating Buffalo Springfield.

Guitar embellished with semi-precious stones, natural material and mixed media. Inspired by the music and message of singer/songwriter Alanis Morissette. (Performances at the Whisky, House of Blues Sunset Strip.)

Kathy Rose is a recognized jewelry designer and businesswoman. She owns and operates Roseark gallery in West Hollywood and Santa Monica, and has launched Kaviar Jewelry and Native Rose clothing line. She also serves as the accessories editor for Foam magazine.

Acrylic and spray paint. Linkin Park's first shows ever were played on Sunset Boulevard. In this illustration, the band's iconic "Hybrid Theory" soldier is shown in a moment of reflection. (Performances at The Roxy, House of Blues Sunset Strip.)

Mike Shinoda is a songwriter, performer, record producer and visual artist. He is best known for his vocal and musical endeavors with two-time Grammy Award-winning, multi-platinum alternative band Linkin Park. Shinoda graduated with a B.F.A. in Illustration from Art Center College of Design in 1998 and received an honorary doctorate of humane letters in 2009. He has a hand in most artistic facets of Linkin Park’s artwork and imagery, including art for the band's albums, merchandise, web and stage.

Mixed media guitar celebrating the colorful music career of Janis Joplin. The design features her portrait, signature, tattoos and other mementos of her life. (Performed at the Whisky.)

Lyle Tuttle is a well-known American tattoo artist and tattoo historian. Tuttle opened his first tattoo studio in San Francisco in 1954. He has tattooed Janis Joplin, Cher, Henry Fonda and Paul Stanley among others.

Graphite on paper and graphic wrap guitar using a modern day approach to the old school black and grey style of fine-line tattoo art. The guitar celebrates the prominence of the Mexican art culture that originated in the 1970s, here on the streets of Los Angeles.

Kat Von D is a renowned tattoo artist and the star of the former hit television series LA Ink, which ran for five successful years. She is the author of three New York Times bestsellers, High Voltage Tattoo, The Tattoo Chronicles and Go Big or Go Home. She is the creator of a popular makeup and fragrance line for Sephora. She is also the founder of Wonderland Gallery, an art gallery and boutique located next to her tattoo shop, High Voltage Tattoo, in West Hollywood, where she resides with her awesome hairless cat, Piaf.

• Stacey Wells, “Welcome To My Nightmare”

Stacey Wells has become a familiar face on The Sunset Strip, recently creating a collection of art she calls “Reflections of the Strip,” which features musicians who have made it big after starting on The Sunset Strip as well as new, talented bands that are paving their way today, playing at The Roxy, the Whisky and the Viper Room.

Born in a nondenominational hospital to two able-bodied humans in the year of our Lord 1984, The Wizard has spent the last 29 years traveling the Earth, harshing mellows. The Wizard currently spends his time farming hair, clicking furiously and making dreams real.