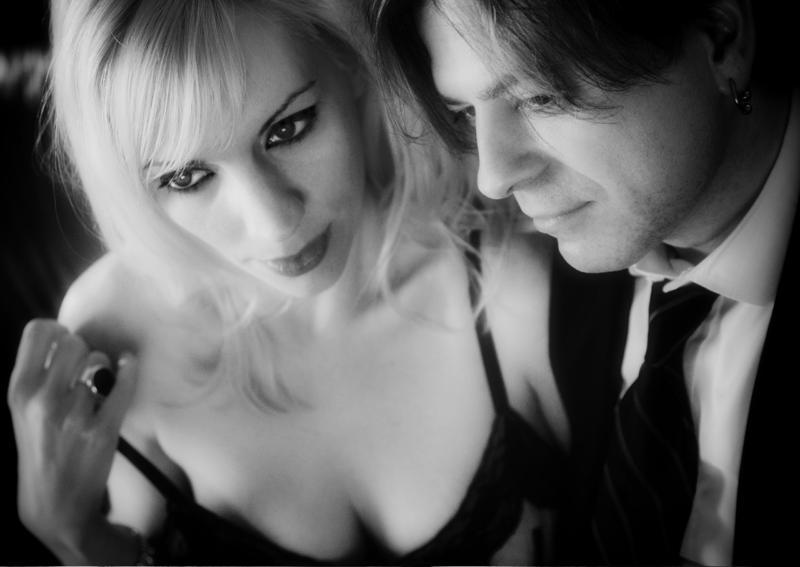 ‘Tis the season tonight at the Viper Room when 8mm hits the stage for their Third Annual Holiday Show. Promising “candy, balloons and holiday cheer,” the trip-hop duo comprised of A-list producer/engineer Sean Beavan (GNR, Marilyn Manson, NIN, No Doubt) and wife Juliette Beavan will deliver a sleigh full of sexy carols to the masses. Before they take the stage, learn about the holiday movie quotes and albums that inspire their sultry seasonal spectacular.

Your first LP was titled Songs to Love and Die By. What’s your favorite song to make love to?

Juliette: Anything off of Blackjazz by Shining!

And on the other hand… what’s your first choice for a swan song?

Juliette: “In The Lap Of The Gods” by Queen. It’s the appropriate mix of grandiosity and resignation.

Sean, as a producer/engineer, it seems that you thrive in controlled environments where you can take the reins. Are live gigs more nerve-racking or unsettling compared to working in the studio?

Sean: Setups and tear downs are always nerve-racking. But once the curtain opens, and the crowd steps forward, it feels like home. My favorite, absolute favorite thing to do is to entertain, and the idea that once it’s done it’s out there is so freeing as opposed to the “do it over again,” “is that great?” aspect of the studio.

After you spend a whole lot of time alone trying to be creative, it is awesome to do something and get immediate feedback from an audience. Of course, when you get to do that as a couple, it is even better.

Juliette: A Christmas Story. We actually quote it year round. You’d be surprised how often you can use “you’ll shoot your eye out!” and “he had yellow eyes, so help me God, yellow eyes!”

Describe your most unglamorous/embarrassing day job?

Juliette: Being a dishwasher was unglamorous but strangely rewarding. You know, because there’s no “maybe”…something is either clean or it’s not. There is a zen to cleaning. I’ve seen guys with mops who had more artistry than some musicians.

Juliette Lewis, Juliette Binoche or Shakespeare’s Juliet Capulet, which other notable Juliettes do you most relate to?

Juliette: None, really. Juliet Capulet was a douche with an itchy trigger finger, if you ask me. Nothing against the other Juliette’s, but I’ve never wanted to be anyone other than myself… Well, a rich me would be nice, but me none the less.

Being a husband and wife duo, would you describe yourselves more as Sonny & Cher or Stevie Nicks & Lindsey Buckingham?

Juliette: Sonny and Cher for sure… Minus the break up and the ski trip.

This is your third year playing a holiday show at the Viper on The Sunset Strip.  What about The Strip says “Seasons Greetings”?

Juliette: The Santa thongs at the Hustler Store, of course!