†††: ASCENSION ON THE SUNSET STRIP 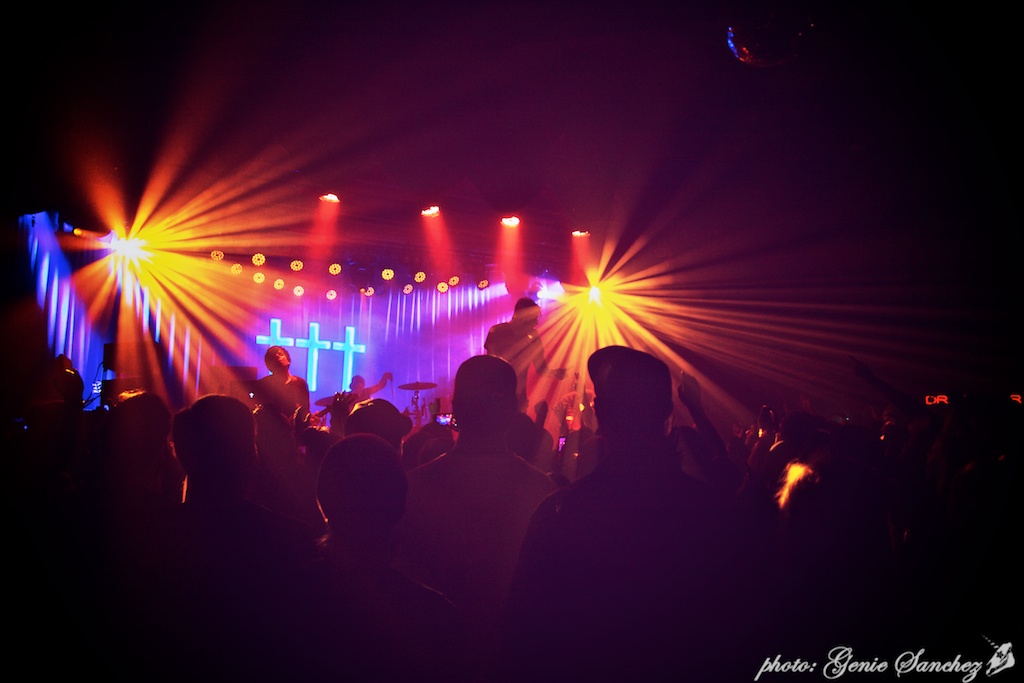 Thus far (no pun intended) 2014 has been a big year for ††† (Crosses) – the new project from Deftones frontman Chino Moreno and Far guitarist/producer Shaun Lopez.  The band released their first full length record, which debuted at number 26 on the Billboard Top 200 and just recently sold out The Roxy Theatre on their break between Coachella weekends.

Amidst a crazy mid-tour schedule and a hailstorm of media requests, TSS.com was fortunate enough to snag a few minutes with ††† co-founder Shaun Lopez, who shared with us some “revelations” about the band’s upstart, his first Coachella experience and explains his fondness for a certain rather creepy song from Silence of the Lambs.

Give us a quick primer on how this whole project got started and your role in the band?

A while back, I met Chuck (Chuck Doom, bassist and co-producer/collaborator) through a mutual friend of ours and he played me an ambient piece of music that I really dug… We discussed collaborating on some music and that eventually led him over to my studio, where we found that we immediately had chemistry.   Sometimes full songs were even written and recorded in one day (sans vocals).

I’ve known Chino forever it seems, and whatever I’m working on, I will usually play him things that I think he might like… One of the first things I played him was the track “1987” and he loved it!  He asked who was going to sing on the stuff, and at the time we didn’t know, so he expressed interest…

I wear a few different hats in the band I guess… I would say my role in the project is producer/co-writer/visual aesthetics.

Has it been difficult trying to maintain/stay consistent with the use of the ††† symbol (i.e. Prince and his “love symbol”) as your band’s identity?  I believe on the original Coachella lineup announcement you were billed as “Crosses” and it was later corrected to “†††.”  Also all those song titles with “T” letters..?

Honestly?  It hasn’t been that fun, but I believe it’s all worth it.  I’m sure I’ve been a real pain in the ass to our management/label/agent, but it all comes from a good positive place.  In my opinion, ††† vs. Crosses is a no brainer.  When you see the three symbols on a flyer or billboard, no matter what you know or think about the band, I would hope it intrigues/confuses you… makes you want to know more, ask questions.  Which I think is a good thing.

Speaking of Coachella… How was your debut experience?  Also, going up against Outkast had to be a little concerning?

Coachella was great!  Just to say we’re playing/played Coachella is something I thought I would never be able to say.  I haven’t been to Coachella even as a patron since 2005, and it’s crazy how much it’s changed.  Just walking through the crowds, you realize how massive this thing has become.

I was never too worried about playing “against” Outkast, since there are 120,000 people there, and I doubt every single one of them is going to want to go see them.  The first weekend hurt us more than the second… We had a pretty massive crowd the second weekend, where as the first weekend the tent was about half full; but when you think about how big those tents are, that’s still a lot of people!

So I noticed a cover song during your set at The Roxy.  A notoriously creepy song from the Silence of the Lambs movie…

I’ve always loved doing covers, so when it came time to doing shows, we put together a list and I suggested that one (“Goodbye Horses”)… Chino said he had never heard it, which is crazy since dude is kind of a musical encyclopedia!  We learned it one day at soundcheck and started playing it that night.  From there it kind of caught on and was a big crowd favorite.  We have been pretty much playing it ever since.  I love turning people onto music that they might have missed/forgotten about… There is so much good music out there!

Born in Sacramento, now living in LA… Was it meaningful for you in any special way having sold out The Roxy on The Sunset Strip?

Selling out The Roxy in 15 minutes (or whatever it was) was a huge moment for me.  I remember living in Sacramento and getting online at 10 a.m. to buy tickets for Smashing Pumpkins (w/ QOTSA opening) at the Roxy in 1999.  I was able to get them and drove down for that show, which was great.  So it’s amazing to be in a band that has people care about them in a similar way for sure.