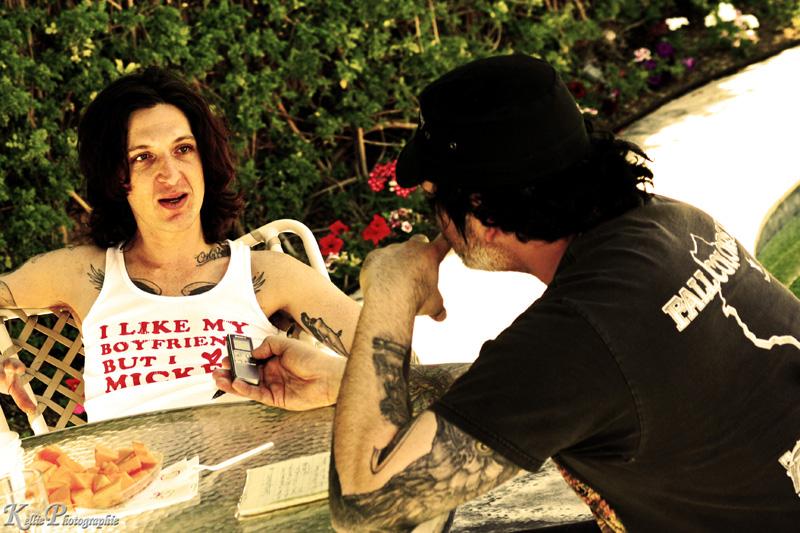 Grab the “Parental Advisory” stickers, because Mickey Avalon is back! Returning to his home at The Roxy Theatre on Saturday, May 14, with all new jams – as well as a catalog of rap-a-long classics – Avalon is poised to release a truck load of new material over the next few years including a new record, a live album, and a number of unofficial “bootlegs” and “mixtapes.”

Giving us the inside scoop on all his latest developments, Avalon invited TheSunsetStrip.com to his mother’s house in the valley for an exclusive poolside interview. Over cantaloupe and iced tea, the party boy rapper laid out his not-so-secret plans for music world domination. Here’s how it all went down…

So returning to The Roxy again May 14?

Yeah, we’re gonna record that show for a record, ‘cause my favorite Social Distortion record is Live At The Roxy… That’s the place I played my first show; that’s my hometown…so I want to one day release that as like a double album… But that’s not even my next record. My next record is called On The Ave. Half the songs are already mixed and mastered, but we’re still in negotiations with the label, trying to get my songs back — that’s a whole long story. But once we do, we can get the record ready to go, ready to be released in like three months.

Is a lot of the stuff you’re going to release existing material that has sort of been around for a while and you just hadn’t found a place for it?

No. I mean there’s like brand, brand new stuff, and then there’s a few that are two, three years old, but it sounds even more current then it did then. It’s the same producer as the first record.  It really sounds like the follow up to the first record. And you know, I play live now, and when I recorded the first record, I hadn’t started playing yet so I’m now able to sort of think about how a song will be played live. And I have played most of the songs, I’ve tried em out to different crowds and I know which ones they go crazy for on the first listen, and which ones that I thought were going to work and didn’t. Like I said, I’ve been listening to them in the car and I think they’re pretty bad ass

And lyrically it’s even better. Not all of these characters die [laughter]. Like on my first record I think everyone just pretty much dies, but this is more debaucherous…

Most of your lyrics – and sort of what brought you to notoriety – have been about partying and your sort of crazy past life. Now that you’re a little older, a little more stable, has that influenced your writing? What can we expect lyrically on the new record?

I mean I’m not 18 anymore obviously…but things haven’t really changed that much. I mean life went one way, and then it kinda came right back around… So things are actually kind of the same; the same stuff.

I was listening to some of the new songs that we’re finalizing for the new record in the car – to see which ones I want to use – and it was funny. Kinda like I’m a prophet in my own life. I talk about shit, like just joking about stuff that I hadn’t even done yet or whatever. And now looking back, it’s like, “Oh my god, I’ve started doing a bunch of these things; and not all of them good.”  And before they were just like jokes.

…But I’d say [on the new record] it’s all sort of the same characters. The same play, just the next chapter, which is exactly how I wanted it to be anyhow.

Speaking of, when you’re partying before a show, are there certain shall we say substances or libations that change or influence the outcome of a performance?  For better or worse?

Well, you can’t drink anything with bubbles in it ‘cause that’ll make you burp… Tequila you get a pretty wild show, but it’s not something you can do every night… And then vodka you can pretty much do every night, but that’s still a little hard on the body… Wine is good, but you know it’s a little sharp, a little acidic. Now-a-days I just do a little vodka and wine combo.

There definitely are things you should stay away from, unless you’re already like three sheets to the wind and you don’t give a fuck… Like when I was in Australia, and…it was the last show, and we were staying on the Gold Coast and “someone” gave me this acid that was on SweeTarts… I starting taking them around soundcheck time, and by the time the show came I just had this ear to ear shit eating grin, and everyone was like, “Wow, you’re really good on this stuff” ‘cause I was all happy… But then I just got more fucked up and more fucked up and I can remember from looking at pictures that I just missed like whole songs, and I’m just laying on the floor, no shoes, no socks, but people loved it. Everyone had a great time.

How many times have you been to a concert and been like, “that show was perfect?” I think things like that are more interesting, more memorable.

Now your daughter maybe getting to an age now where she’s old enough to listen and maybe better understand your stuff..?

Bowie used to be her favorite, then it was like MGMT. I don’t know what it is now, but she definitely doesn’t like rap.

Any concern with her sort of researching dad online and reading about your past hijinks?

I’ve always just told her that it’s all fiction, and just like a character. I mean she knows what’s real and what’s not.

Do you think it’s difficult career wise, doing what you do, being a sort of crossover act?

I mean it’s the best job I ever had, so I’m just happy to be here.  And like I said, I’m just excited to go back to work.

Mickey Avalon plays The Roxy Theatre this Saturday, May 14.  Doors open at 9 p.m. and tickets are $20. www.theroxyonsunset.com Keep up to date with all of Mickey’s hijinks and happs at www.mickeyavalon.com