TheSunsetStrip.com Exclusive Interview: Into The Presence 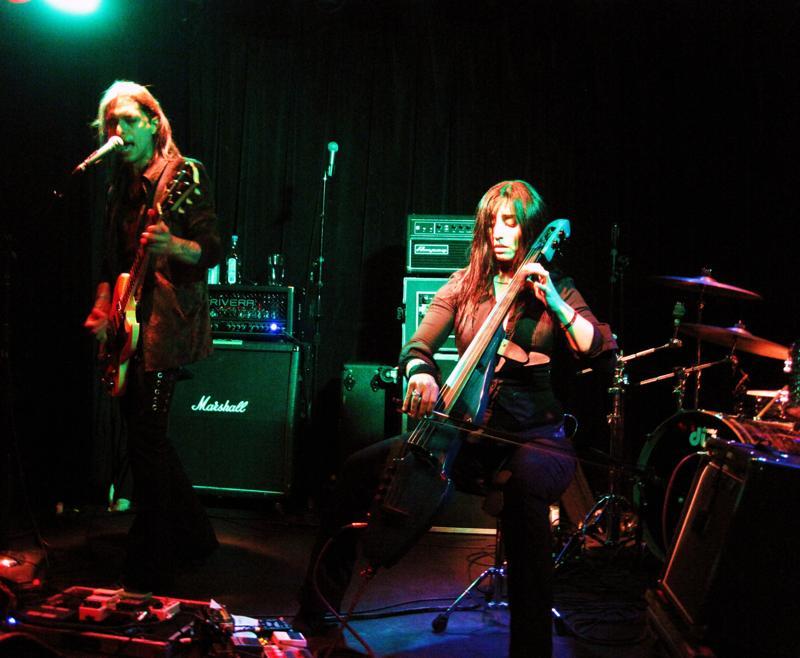 Prog/art rockers Into The Presence took the stage at The Viper Room on Jan. 14, emerging from a long hiatus to test the waters with brand new material. Originally a sort of collective of longtime industry pros whose recorded lineup consisted of Luis Maldonado (UFO, Train), Ana Lenchantin (A Perfect Circle, NIN, Gnarls Barkley) and Tim Alexander (Primus), the band is back with new songs, new members and a new label. After their energetic performance at The Viper, core members, frontman Maldonado and cellist Lenchantin, spoke with TheSunsetStrip.com about what’s to come for this dynamic duo.

MALDONADO: Bieler Brothers Records is going to take our first album and release it properly. We just finished some bonus tracks and shot a video for the single “End Game.”

We are also in pre-production for the second record, so it’s quite possible we could have two releases this year, but we will see. There’s so much we want to do.  Now that we are a solid band, everyone is excited and ready.

We have plans to tour in the summer and I know that the label wants to go to radio with the single.

Other than that we have a lot on our plate creatively and it feels great. The current lineup is Morgan Young on drums, and Nils Bryant is our other fine musician. Every person in the band is great to work with and, more importantly, fun to be around. It’s rare to have both in a band. Personally, I only want to work with considerate, good human beings that want to be creative with a purpose. I feel we have that now.

Into The Presence was initially conceived as a collective of all-stars and seasoned veterans. How was the project originally assembled?

MALDONADO: It started as my solo record. I came to Tim’s [Tim Alexander of Primus] studio with all the songs and somehow during the process it felt better to make it a group effort. That’s really how it went down. Tim then brought in Ana and Paz [Paz Lenchantin of A Perfect Circle, Zwan, The Entrance Band] to do some tracks. After the album was finished we got a deal, manager and a booking agent and started playing out. However, it was mainly Ana and I that were/are the core of the group that held it all together. Tim left to do abstract art, and we had gone through a revolving door of many friends in the industry to tour with us. After all is said and done, we have the right lineup now that is the best yet!

You saw the show…it’s the most energy we’ve had. I’m very happy that the majority of songs we are playing live are new and created with this lineup. Makes a big difference when you play your own parts as opposed to learning someone else’s. The fact that Ana and I have been rehearsing new stuff with Morgan and Nils makes it “our” sound; unique, and I would say much better. I guess you can finally call us a real band and not a project.

LENCHANTIN: Tim and I have been friends for many years. He called me one day and told me about a new project he was working on. Months later, I met Luis at a Primus after party and we just hit it off. Shortly after that encounter, Luis and Tim flew me out to Jerome, Ariz., to record on a few songs and I pretty much have been playing with Into the Presence ever since.

Having worked with some of music’s more “intense” personalities in your other projects, what have you learned about egos in a band?

MALDONADO: Uggh… just drop it; drop the ego. Humility has to come from a place of gratitude. Too many musicians "feel" like they deserve more credit or behave like it’s their right to demand such things. The thing is, if you really have creativity inside of you, you don’t have to ask or demand credit. Your gift makes the way for you.

It has been my experience that the insecure ones and those with little creative flow feel that they have to compensate with ridiculous unreal requests and/or behaviors. What I have learned is to always work hard, be thankful, share realistically and not overcompensate to make others feel like they are part of something great. The best lesson is being open and straight up with everyone involved.

LENCHANTIN: I pretty much ignore the egos… I do what I do because I enjoy it. To be honest with you, I have only had to come up against egos a small handful of times in my career. If you don’t feed into it, it just kind of goes away. I have found that most people with egos are asking for attention in a strange roundabout way. It’s a complete waste of energy, and I don’t have the patience or tolerance for it.

ITP has one of those unique sounds that truly defies genre. What’s your experience been like playing gigs with not-so-likeminded bands?

MALDONADO: It’s been interesting seeing people’s reactions, not knowing what to do with us at first listen. Even more interesting is that 10 minutes into our set they "get it.” Across the board every show has been like that. We have played with death metal, electronica, singer/songwriters and a wide variety of bands from different genres, and we seem to have been able to come across every time. I am so grateful for the people having open ears and minds.

LENCHANTIN: We have yet to play with a band that is similar to us. I’ve loved it because I know the audience has no idea what they’re about to hear. I come out on stage in the middle of the set so I always stand out in the audience for the first half to see if everything is ok sound wise and to get a feel for the audience. It’s really interesting to see their reactions.

At first they look around like "What the hell is this?" and by the end of the second song they’re very still and focused. Then there’s the usual "Wow… that guy can sing…." and by the third song they’re into it. Of course there’s a few people that want to hear the band they are there to see and respectfully listen, but more often than not, people hanging out by the bar or smoking outside will slowly start to flock towards the stage interested… It’s pretty cool.

You both come from Latin backgrounds, how has that influenced your music?

MALDONADO: A lot! [laughter]…For me, it’s in there always. I have melodies and words [in Spanish] that come to me all the time. I go with it and let it be part of anything I write or play.

LENCHANTIN: Both my parents are concert pianists, so the music I grew up with was classical, classical, classical. But I have to admit that there is something in the blood. Being from Argentina, I have heard many tangos and Argentine "Folklore." I hear Piazzolla or Mercedes Sosa, and it just moves me incredibly.   I have a really hard time understanding how people don’t have rhythm… Is that a Latin thing?

You have both been in the industry for a number of years, how has the business changed? With the current DIY mentality amongst bands, is it easier or harder to succeed now than it used to be?

MALDONADO: I have seen it change so much for the last 15 years. It almost seems like it went from every four years to every six months there is some new "scene," but as always with scenes there is very little innovation.  That is why I love DIY bands from any genre. They don’t care about format, or some label dick that tells them what is big now. They do it for the right reasons, the love of music. However, it has been a little harder these days because there are no budgets for tours, development, even recordings. People think the internet helps, but sadly it doesn’t yet. To tour and play you have to make some serious sacrifices especially when there is no tour support.

The best way to succeed will always be the tried and true way of having great songs that are different and don’t follow a trend, a great work ethic, a positive attitude and touring the shit out of the states.

People have to see you play. There is only so much sitting on your ass in front of a computer [that] people will do, so going to a show will always beat "sampling" music on Myspace or whatever.  Those who believe all the way are the ones who will succeed; those who just want a quick ride will get only that.

LENCHANTIN:  I have been fortunate – not to be confused with "lucky" because I’ve worked my ass off – to have worked with some amazing musicians and bands, and as such, I have been well taken care of: great tours, bands and recordings. What I love about the DIY thing is that it allows creative folks to be creative and get their material out there without agents and labels and managers.

What I don’t like is that there is a bit too much unprofessionalism in my profession now and a lot of "impostors" – one of my favorite Luis words – cluttering the venues. Harder or easier to succeed? Not sure about that one… Sometimes it really is about the right time, place and economy…

Of all the musicians/bands you’ve collaborated with, who were you most excited about working with?

MALDONADO: Well, that’s tough to say because they are all different and they each have an amazing gift in music. I learn from all of them and that’s the most rewarding part, to share the gift of music with each other.  I still get goose bumps when I work with Glenn Hughes (Deep Purple). Come on, his voice is insane and will make the impostors run.

For more info, follow the band @IntoThePresence or visit www.intothepresence.net.