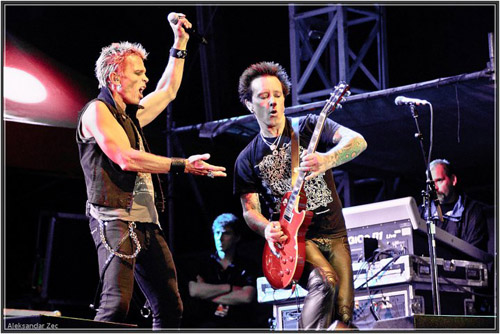 In what’s become a highly anticipated annual December tradition, the Royal Machines (formerly Camp Freddy) are returning to The Roxy Theatre stage this Friday and Saturday for two back-to-back sold out nights.  Besides getting the chance to see this band’s already star-studded lineup – which now consists of Billy Morrison (Billy Idol, The Cult), Chris Chaney (Jane’s Addiction), Dave Navarro (Jane’s Addiction), actor/musician Donovan Leitch, Mark McGrath (Sugar Ray) and Adrian Young (No Doubt) – these yearly performances have become notorious for their surprise A-list special guests, which in the past have included unannounced “drop-ins” from notables such as Steven Tyler, Ozzy Osbourne, Billy Idol, Courtney Love, and Lana Del Rey, amongst many others.

Before taking in this weekend’s rock n’ roll Yuletide spectacular, catch up with Royal Machines’ co-founder and man of many bands Billy Morrison, as he shares his new found love of fine art, talks Billy Idol, and reflects on seven years of Roxy holiday shows’ past.

So from Camp Freddy to now the Royal Machines… this December residency at The Roxy has been a long standing annual tradition.  Is there any one show over the years that sticks out in your mind as having been particularly special.  What are your recollections?

Yeah so this is the first Royal Machines’ residency, following in the footsteps of the previous seven Camp Freddy residencies…  And so picking one show out is almost impossible now – there are so many moments from so many years that stand out…

Cypress Hill doing “Paradise City” and the whole place jumping in unison, that was something to see!  Getting Paul Cook, Glen Matlock, and Steve Jones on the same stage to play Sex Pistols songs was pretty fucking awesome as well!  Also, I would have to say having Mick Fleetwood and Steven Tyler onstage with us was a highlight as well.

What’s the most memorable Christmas gift you ever received as a child?

Great question!  I think I would have to say the Six Million Dollar Man action figure, complete with removable bionics.  That or the whole Evel Knievel thing – the bike, the figure, the mobile home.  These things stuck in my mind.  I really wanted them!

You recently just got off the road with Billy Idol and also co-wrote much of the new record with your pal Steve Stevens… What was that experience like finally writing and recording with those guys as a band?  Did you feel any pressure in the writing process trying to live up to past successes?

There is absolutely zero pressure writing and performing with Billy and Steve, except for the pressure I place myself under!  Those guys are the coolest, most open and willing artists.  It’s me that puts the pressure on myself.  Of course I want everything I write, every note I play on a stage to be the best, most emotive, most appropriate note possible – which is of course ridiculous!  We are all just guys making music together and sometimes I have to check myself, remind myself of that… To quote Mick and Keith, “It’s only rock n’ roll…” and then subsequently to just enjoy the process, the gig and the journey!

You’ve played with so many rock n’ roll giants over the course of your career.  Is there anybody that you haven’t worked with yet, that would be sort of a dream goal or collaboration for you?

Believe it or not, I have always wanted to have an original music project with Dave (Navarro).  He has a musical sensibility that is different to mine – he comes from the discordant, higher string, no power chord school of the alternative/punk/art scene.  I of course come from The Sex Pistols, AC/DC school of chunky rhythm guitar.  I’ve always thought that if the two of us could actually find the time and the headspace to write together, we would come up with something pretty cool.

I’d also love to write and record with Trent Reznor, purely because he is at the pinnacle of that genre – one of my favs.  Other than that… Maddona, Iggy Pop, David Bowie and Adam Ant are all guests for the Royal Machines that would be on my wish list.

Speaking of special guests… What sort of surprises can we expect at these upcoming Roxy shows?  Can you give us any hints as to special guests?

Silly question!  We never talk about who’s gonna be there… Mainly because we don’t know ’till it happens!

Lately you’ve been exhibiting your fine art at a number of charity events and galleries.  Is painting a more recent artistic endeavor that you’re just now exploring?  Also, you seem to be a bit partial to hand grenades as a subject matter, please explain…

Although I have been an art connoisseur and collector for quite a few years, I had never put brush to canvas (or pencil to paper) until February of this year.  I never thought I could do it… But thanks to a couple of people pushing me in that direction, I eventually painted something for a charity auction in February.  I expected a childish stick figure to come out, but instead some crazy dripping gold skull appeared in front of me, and my creative fire was burning extremely high.  From that day, I have painted most days (even on the road), amassed a decent body of work, and I held my first art show this past October.

The reaction to my pieces, and the success of the sales have made me realize that if I am honest with myself when my brush hits the canvas, it will work.  Art is art and it is primarily for me.  If it touches other people, then I have succeeded.

The hand grenade is a violent and iconic image to me, that when painted in beautiful colors, or in a soft light, or dripping and melting, seems to speak of a huge dichotomy that we live with every day in this world.  It’s a beautiful disaster. It’s destruction at its most poignant.  It’s the pastel-shaded, beautifully lit chaos in which I live.

Favorite holiday/Christmas movie of all time?

The Nightmare Before Christmas, because it’s Tim Burton and he is God!  And Home Alone, a true classic.  And also, does Die Hard count..?  It takes place on Christmas Eve…  And who doesn’t wanna see Bruce Willis blow shit up and win the day in triumph!

What’s coming up for you in the new year?

Starting New Year’s Eve I am pretty much booked solid for a year.  There will be a lot of touring in support of the new Billy Idol album.  I have movies to make.  I have TV to make.  I am planning a second art show.  And Royal Machines continue to do their thing… 2015 will be a very busy year for me, and for that I am truly grateful!

And finally, any New Year’s resolutions for 2015?

To continue to live my life to the fullest.  To enjoy my work, my friends, and family.  And maybe to give up smoking once and for all.

Royal Machines play this Friday and Saturday (Dec. 19 & 20) at The Roxy Theatre.  Both shows are sold out.  www.theroxy.com