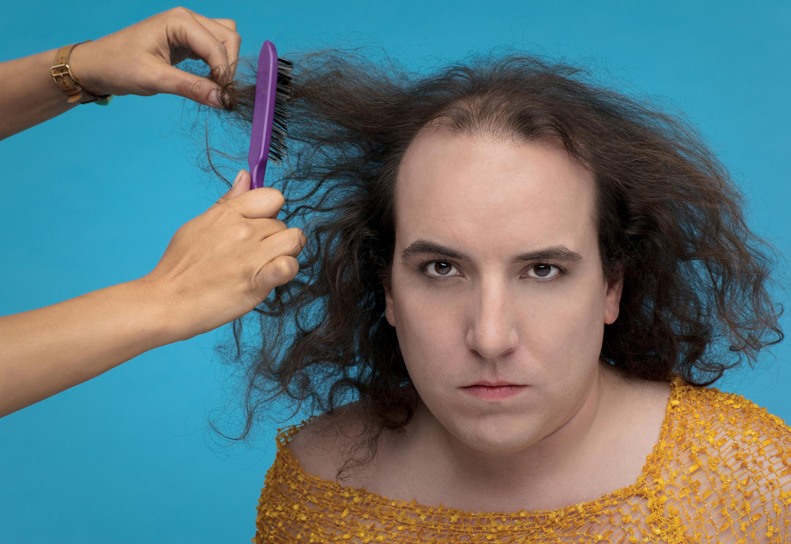 Singer, songwriter, actor, dream weaver. Sean Tillmann, better known as his tongue-in-cheek persona Har Mar Superstar, has built a worldwide cult following, dishing out dirty innuendos over slickly polished beats. Tonight, the underground legend unleashes his "sexual napalm" on The Sunset Strip when he takes the stage at the Viper Room. Before heading out to the show, catch up with the man-of-many-briefs as he discusses pillow fights,  Ron Jeremy, the Crüe and Britney Spears.

You’re currently touring with your fourth record. How has your style evolved during your career?

On the first record, my friends and I were learning how to make beats and pop music through trial and error. We all came from punk and noise backgrounds, so the sound was pretty lo-fi. Throughout the years my sound has become more polished, although recently I’ve been getting back into gritty sounds. As the years pass, the live show is less about costumes and theatrics and more about musicality and my voice. The fun is still there in force. It’s augmented by a live band. There’s more to look at and connect with.

How has The Sunset Strip inspired/influenced your music and lifestyle? On your song “Save The Strip,” who/what are you saving The Strip from?

When I first moved to L.A. [eight years ago], I was obsessed with the Mötley Crüe oral history, The Dirt by Neil Strauss. My friends Preston, Jeremy and I ended up moving into the apartment that the Crüe lived in during the early parts of their career. It’s half a block from the Viper Room. Silver Lake was already cool and Echo Park was coming up in popularity. I thought it’d be amazing to change it up and make everyone come to us on The Strip. I was hoping for another debaucherous heyday for Sunset.

I get confused with Ron Jeremy, Gallagher and Jon Lovitz a lot. My response really depends on my mood and how dumb the person looks. It doesn’t really annoy me too much anymore. I do look like all three dudes…many years ago. People normally just get a, "really?" Other times they get a, "jealous?" I’m buddies with Ron Jeremy. He’s a smart guy, so I take it as a compliment.

Is it true you pitched the track “Tall Boy” for Britney Spears to record?  What’s the story?

I originally wrote “Tall Boy” with my friend Greg Kurstin for Britney. She was looking for new tracks, and I love her dirty pop. It got rejected by her management because they were trying to get her a more family oriented image. That was years ago, just before the shaved head phase.

I pitch songs to other artists all of the time; they get rejected all the time. It’s part of the process. I’m just glad I have Har Mar records as a forum that I can release the ones I really “love on.” I think I sing it better anyway.

You’re known for performing in your skivvies.  Do you have a superstitious lucky pair for special occasions?  Ever thought about marketing your own line of Har Mar tighty whities?

It would be really gross to have just one special pair. I like to keep the rotation going strong — I like variety! I’ve thought about starting an Underoos type line and have sold underwear as merch at my shows, but I’m far too lazy to get into big production and selling my line to stores. It’s not my focus. Too much other shit going on over here.

During a recent appearance on “Lopez Tonight,” a pillow fight broke out during your performance of “Girls Only.”  Who won?

You don’t really "win" a pillow fight. On the show, Lopez and Eva Mendes had the pillow fight with the audience. Ultimately we won because the feathers were everywhere!  It looked like it was snowing on the Warner Bros. lot. You have no idea how many feathers are in a down pillow until you crack one of those suckers open.

You’ve made a number of film cameos over the years (Whip It, Starsky & Hutch). Any plans to transition into acting? Any upcoming roles?

I have been screenwriting and acting a lot over the past few years. It wouldn’t be a huge transition for me because I’ve been acting as long as I’ve been doing music. I’ve been developing a comedy series with HBO that I wrote with my friends Ellen Page and Alia Shawkat. Hopefully we get to start shooting it soon.

In a play-by-play fashion, describe a Har Mar performance to a blind audience member.

I come on stage and unwitting audience members may be wondering what the short, white guy with a gut is about to do up there. The music starts and the sound is pop/ R&B. People get confused. My voice soothes the masses. The stage starts to get hot, so clothing comes off piece by piece as the night progresses. By the end, the audience is “loved up” and trying to make out with me. I oblige. You don’t have to be able to see to feel that the tension is palpable.

You can catch the superstar himself in person tonight, Nov. 16, at the Viper Room. A limited number of tickets are still available through www.viperroom.com ($12 in advance, online, $15 at the door). Continue to discover Har Mar Superstar at harmarsuperstar.com.